Hmm. 'Original' and 'pioneering' were not in the vocab for this trip. Like so many pilgrims before us, we ventured south in search of the not-so-elusive cat on a whistlestop trip to España. However, unlike those crusaders before us we found the big puss considerably harder work than we imagined. But when it did finally give itself up, boy did it show!  Plus we were treated to a pretty damn good supporting cast. Rather than spout the same old info as everyone else, below are a few added extras that may make future trips a tad easier for trying to bag the kitty.

RoMa highlights the key sites/reports to follow of which Lee Dingains is the most comprehensive and also includes a very useful map.

We flew Easyjest from Glasgow and hired with Holiday Autos who gave us a Centauro car  seemingly the best deals available. We got a high spec Ford Focus for the £33 so plenty of room and plenty of speed. The journey north is simple and is motorway north to Cordoba and then east to Andujar. At Andujar take the second exit (Junction 321) and head in to the hills from here.  Los Pinos hotel in Las Vinas is the place to be  cheap, comfortable, and good food. If you want to go cheap order the Entremesas on the menu: these are generally big enough for two to share with some patatas fritas. There is a tiny shop in the bar here that sells fresh bread, cheese and jamon Iberica but if you want more then stock up in Andujar as youre passing through. Bear in mind that booking the rooms may be difficult unless you have a fair grasp of Spanish as seemingly no English is spoken (makes a pleasant change!).

Timing your visit  In Spain seemingly the entire urban population ups sticks and heads for the hills at the weekend. Therefore expect Los Pinos to be mental and for there to be more than a handful of people looking for lynx. The latter fact could work in your favour as the more eyes the better in some senses but see below for our take on it.

Day length  when we visited dawn started at about 0640 and by 0710 it was light enough to scan hills 1km away. Dusk fell about 2000. This means that there are plenty of hours in the day  enough for a siesta if you are planning nay night drives.  Dont worry about eating either  the restaurant doesnt seem to close at Los Pinos!

Driving - The drive to La Lancha: do not underestimate how long it takes to drive from Los Pinos to La Lancha. Its about 25mins from the hotel to the junction at the farm buildings and about the same from there to the white concrete blocks. Its a further 15mins from there to the dam. All these durations are without stopping. Once the tarmac road stops the condition deteriorates rapidly and is frustratingly slow. It is well worth taking out collision damage waiver on your car hire just to be on the safe side.

Trapping  Having read through a number of previous trip reports we noticed that many people bring small mammal traps with them. Apparently trapping of any form including pond dipping and butterfly nets is illegal in Spain without a license, especially in National Parks, so hide those Longworths well and use a pair of your missus stockings as an appropriate field net!

Whilst many people seem to see lynx here there and everywhere, they are not always that easy to see. One thing I hadnt realised before arriving is that some of these animals are reintroduced individuals (although on further reading it appears that they are not located in the areas we were watching).  Having originally thought the whole population was wild I was a tad disappointed to learn this although on seeing one this all went out of the window and the experience was quite easily the best mammal experience I have ever had.  To give an example of abundance, apparently it was possible to see any one or more of 11 different individuals from the white concrete block look-out at La Lancha! This includes last years cubs still present in the area. On arriving on the 20th we met Timo, a Dutch naturalist who had glimpsed an animal at 0800 that morning. Presumably the same animal was seen at 1300 in the same area and there was a further sighting further down the road. On the 21st the only sighting we are aware of was ours, and on the 22nd we are unaware of any sightings! Its not as if we were the only ones looking as there was also a Naturetrek group, a French group plus several couples and small parties. Plenty of eyes but minimal feline action. By the time we departed the Naturetrek group still hadnt caught up with Lynx.

It is difficult to know what the best strategy is for locating them. My feeling was that the white concrete blocks at La Lancha offer the best possibility given the number of individuals and the huge vista, however I suspect that in general views will be more distant and brief here. The Encinarejo Trail has a reduced vista but potentially better views.  Having read through the various reports we opted to have a go at the Encinarejo dam where Dingain et al. had watched an individual down to 3m. On the 21st we headed around to the dam passing the French group at the first viewpoint (who had failed to see anything). We parked up and clambered up the slope to the flat area next to the pylon. This point gives a great view out over the river and the near slopes. It is worth bearing in mind here that animals are generally more likely to be active at dawn and dusk (as well as through the night) and that having a large vista in reduced light isnt always a good thing! We knew that an animal had previously crossed the bridge here so we made a point of one person scanning with bins whilst the other kept an eye on the foreground.  After an hour nothing had appeared other than a queen and kit Otter. We watched these until they were just below us, and now being pursued by a meowter. I dropped my bins and all I could utter was F***, in the car park! There highlighted against the chalk car park was a lynx right beneath us.  Its stubby black-tipped tail and huge ragged mutton-chops shone out. Where it had come from I have no idea but it hadnt clocked us and seemed in no rush. It slowly wandered up the track beneath us, sniffing the vegetation as it went.  I was instantly aware that it would probably take the main track which lead up right beneath us so quickly ushered HW slightly closer to the edge and discarded the camera behind me. At 20m it was still completely unware of our presence and continued its ascent until at 6m it clocked us, presumably on smell. It stood bolt upright and glared before turning back down the track and melting into the hill  like that it was gone! This experience was simply mind-blowing and Im so glad that I ditched the camera and simply enjoyed watching it.

The next morning we positioned ourselves in the car park from 0600 in the pitch black.  We reckoned that this would give the best opportunity to clock a return passage and potentially get a photo but the cat was a no show. That evening we returned again and sat up by the abandoned farm buildings for the first couple of hours. This is again another great vantage point. Over this period up to 14 lynx watchers came and went, all positioning themselves in an ideal-free distribution across the hillside and guaranteeing that the lynx would not stroll through them all. Many of them were clearly unaware of each others presence  quite amusing to watch! Luckily everyone left before dusk and we once again positioned ourselves in the car, but again a no show.

This site is difficult to work as I suspect that too many people are likely to have an impact on the behaviour of cats here but it probably offers one of the most predictable chances of seeing one very well (others have also seen an animal(s) do the same thing). Care should be taken to not over-crowd sites and I suspect that because of this, sites such as La Lancha offer a higher probability of actually seeing a Lynx, even if only briefly. It is also worth remembering that sound travels an insanely long way at all these sites, as was amply demonstrated on several occasions by several parties  if I were a lynx I wouldnt be hanging around these areas! Think Fieldcraft and not puddy tats!

Free-tailed Bat  several of what were thought to be this species came out early at Encinarejo Dam.

Otter  a queen and kit swam upstream to Encinarejo Dam shortly followed by a meowter. They proceeded to tumble around the rocks chattering and whistling but were slightly overshadowed by the Lynx!

Mouflon  9 rams appeared in a mixed herd of Red and Fallow Deer at La Lancha. They fed in full view in the evening sun from 1830 giving fantastic views.

Wild Boar  a boar grazing in full view from 1800 followed by three sows one of which had 6 gorgeous stripy piglets in tow.

Southern Water Vole  a number of holes are visible along the river bank at the Encinarejo trail. I wish Id put a bit more time into these as I failed to see this species.

Garden Dormouse  too cool for school. These endearing rodents are dead easy to see if you sit on the embankment by the white concrete blocks at La Lancha. In fact they are so inquisitive that theyll wander right up to your feet or sit on the haunches watching you! An unexpected highlight of the trip.

Birds (the stuff that matters) 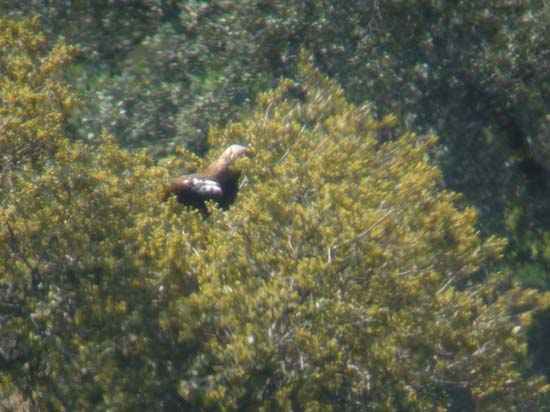 Bonellis Eagle  one over E45 20 mins north of Malaga

Spanish Imperial Eagle  3 adults and a 3rd cy at La Lancha and 2 adults at Encinarejo Trail. Definitely a highlight of the trip with frequent sightings at La Lancha including a displaying pair, calling male, and a hunting adult which caught a rabbit and proceed to sit and eat it close to the watch point!

Black Kite  up to 115 circling at the north end of the E45 about 5km south of the Cordoba junction. Birds were present on the north and south bound journeys in this area.

Great-spotted Cuckoo  common with birds calling everywhere. Up to 3 together at Encinarejo Trail

Southern/Iberian Grey Shrike  one above the La Lancha viewpoint

Rock Sparrow  scattered sightings with birds along road to La Lancha and at dam beyond here, also at Encinarejo dam.

Other species  the dehesa was teeming with birds, with Scops Owl, Hoopoe, Woodlark, Short-toed Treecreeper, Crested Tit, and Hawfinch all common.

Viperine Snake  one on road to La Lancha