A brief sojourn to the north coast to pick up spare parts for my "pod" left me just enough time to walk down East Bank and drive down the Iron Road. A Hobby, 2 Arctic Terns, 3 Little Stints the result.

The Brownmeister lives up to his name with an American Golden Plover that circled the pool then flew off NNE. The swine.

The adult Bonapartes Gull puts in a surprsie appearance during a force 8 Gale! 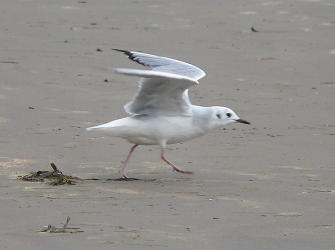 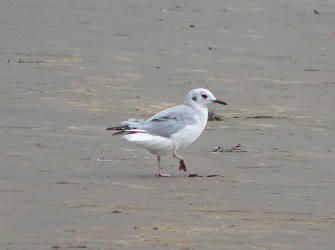 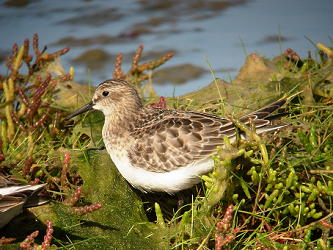 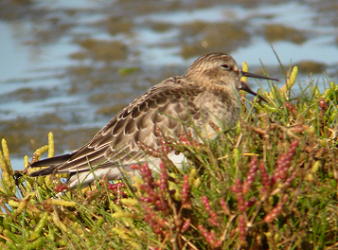 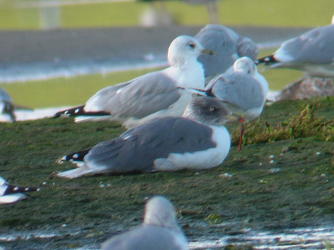 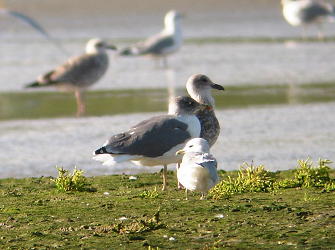 Back in the promised land for another week. Apart from re-discovering some minging Atlantic Seagull horseshit, the boys also produced a juv Baird's Sandpiper, single Buff-breasted Sandpiper and a Ring-billed Gull. Both the waders were present last time anyone bothered to check the site (17.9), but the rules say 6 days without a report = a find, so both will count. Thank god the O'C found the Derrymore Citwag before they got near it.

Well, thats it for Brasil, 5 months something like the film The Fast and the Furious only I wasn't based in California (been there done that...), went birding every day and drove a four-door Fiat Uno (maximum velocity 142km/h down a big hill before one of the wheels started making a funny noise). The rest, hot girls, hot weather, cool beer was available, in spades. And one other thing, its been emotional.

Point was disappointing after predicting loadsa rare for today: 4 Wheatear, 2 Lesser Whitethroat, 1 Garden Warbler and 2 Chiffchaff the only migrants we flushed. A high speed arrival of 8 Song Thrush at the Hood was exciting, with the birds hitting sueda at about 40mph. One juv Pom came past to nail some Terns, could be the same bird as before. One adult winter Black-throated Diver was just offshore from the seawatching hide, with a full summer Red-throat.

Exploring the saltmarsh near Wells a similar lack of migrants was apparent. Always persist. Right at the death I kicked a big pale pipit from adjacent to the main channel at Wells. We chased, accidently flushed it again by getting there too quick and it called, 'schuep.....schup'. I shouted 'Was that the call, 'course that was the call, bloody TAWNY PIPIT!' as Simon just said 'Tawny!' It headed out onto the saltmarsh, but too many creeks starting to fill so we pioneered our way back. Be warned: this is actually dangerous if you don't know where/how to cross, or how rapidly the tide fills the creeks.

One Redstart, one bent-beaked Pied Flycatcher and three Garden Warblers. Big excitement when I heard a high altitude 'querp' and craned my neck to find a tight flock of 68 Black Tern heading determinedly westwards.

Photos are finally dribbling in from recent punkbirder exploits in Dingle, Kerry - the bit of the 'British Isles' that is actually part of New Jersey. More photos and tales still to come. Here are a few of the highlights so far: 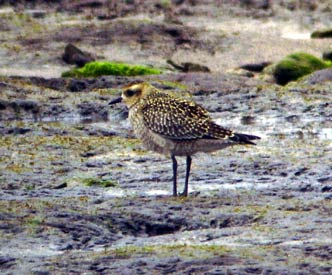 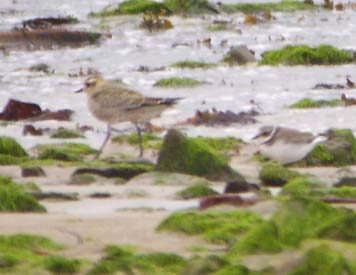 Juvenile American Golden Plover found at Ferriter's Cove, 19.9 (JG).  Capped a classic 1 hour bout of Kerry birding for JG and Ilya Maclean, snatched during a brief lull in the ecology fieldcourse. We started by flushing an interesting mystery stint from Baile an Reannaigh freshwater pool. The stint was only seen briefly at long range - it was flushed by a Merlin and we were immdediately thrown off the scent by a calling Pec bombing overhead in the melee. We followed the Pec towards the beach, but were again thrown off the scent - this time by a newly arrived Buff-breast in amongst the Sanderling! We dashed round to Ferriters in the hope of re-finding the stint, only to find the AGP plonked right in front of the car. Shame the stint never re-appeared... 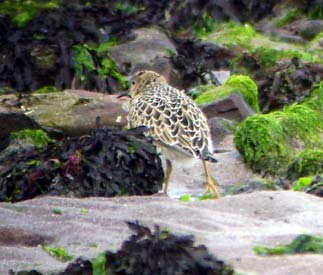 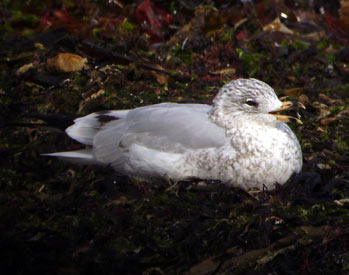 Buff-breasted Sandpiper and 2w Ring-billed Gull, Baile an Reannaigh (JG 19.9). This Buff-breast was much more boldly patterned than the bird that had been frequenting Ferriter's a few days previously. 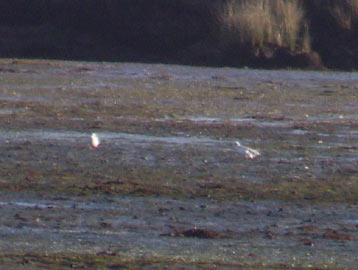 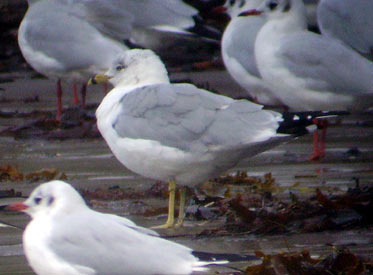 Left: Adult Bonaparte's Gull, Inch Strand , (JG 15.9, right hand bird). Fortunately this bird showed better once it had moved to the other side of the bay (see www.birdsireland.com). Right: Adult Ring-billed Gull on Inch Strand (JG 13.9).

Juvenile Baird's Sandpiper, Ferriter's Cove (DB 7.9). Found by Tom Lowe - he was trying to follow Dan's directions to a possible White-rumped Sand that was sleeping behind a green bottle. Tom got on a different green bottle, and this was behind it... Dan's possible Whiterump turned out to be a Dunlin, thank god.

Red Kite, pale rump and strong contrast on upperwing with large pale median covert patch indicated that this was a juvenile.

Richard's Pipit over Waxham plus possible Camberwell Beauty flew past nearby. Plenty of migrants elsewhere.

Back to reality with standard crap waders present and correct at Cantley and Buckenham. A Pied Fly at Waxham would have annoyed Allwood and Mrs, 'It's dead, don't bother, nothing better than Blue and Great Tits'. Look harder my good man. A few Whitethroats and a score minus four of Farmyard Cranes.

Sheringham seawatch in unfashionable conditions (alone in the shelter!) produced a couple of Bonxies, 3 Arctic Skua and the most exciting Kestrel of 2006 so far, picked up over a mile out and making landfall near Weybourne. Kelling produced one Pied Flycatcher, but Blakeney only added 5 Whinchat, 4 Wheatear, a Willow Warbler and Whitethroat. The return journey was better: juv Pomarine Skua passing close near halfway and actually crossing the bank to cause some chaos in the Blakeney channel. Good wader roosts along the shingle as well: 1 Little Stint, 1 Ruff , 90 Dunlin and 25 Ringos moved along towards coastgurads by a pushchair. 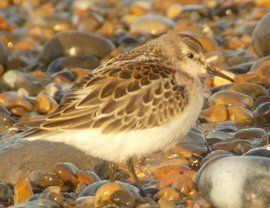 Carrahane Strand (Dan Brown all on his own)

A fistful of Buff-breasts (that's 5) means Dan breaks two Kerry records today. One for the most Buff-breasts at a single site and one for being the luckiest w**ker in the county.

Common Swift at Cringleford (Norwich). My latest Swift so far this year.

Fin Whale, 3+Minkes, and some of those gay small ones.

A triumvirate of juvenile Buff-breasted Sandpipers.

A mid-evening flightback from Team Moores - a juvenile Rosy Starling hits the back of the net. One Semi still on the beach.

Photo below dedicated to those souls in Ireland (its a country near America) busy finding yank waders, better hurry up 'cause we are already getting juveniles down here in Amazonia.... Rest of last week a bit anticlimatic but in the hand tatu and new-to-science here.

No yanking here, just 7 juv Curlew Sand, a Spotshank and 5854 other waders.

Having failed to find the Semi-p at Smerwick on the day he arrived, Rich coralled some back-up and saw double, finding a second juv. SEMI-PALMATED SANDPIPER with the first. No doubt endless debate about points will ensue...

Dan picks up an adult White-rumped Sandpiper, apparently not undoubtedly the same bird found at Dingle by Michael O'Keefe the previous day.

In their excitement, Team Brown manage to get another Semi on.

First day in the Republic and the young pretender returns some profit: juv Baird's Sandpiper. Sadly inexperience found him lacking country gent attire, which no doubt led to the bird clearing off in disgust before he could digi-blast the chappie.