With the autumn promising to go mega and the prospect of finding zero rare through lack of effort careering over the horizon, I decided the best thing for it was to cut the crap and head straight for the source. Furthermore, now was the time for pioneering: all previous trip reports to Corsica that I came across documented spring visits, with a suite of resident goodies I thought I'd mix it up and try my luck in the autumn. The results were expected; good weather, a fruit bonanza and the resident goodies were indeed resident.

For a photographic record take a closer look into my mind's eye (ask Alex Lees for the pic). This trip harked back to the brighter days of natural history and relied on heavy note-taking, just the right balance when you go birding for 8 hours a week.

If an Ascension Island Frigatebird comes to light from Mount's Bay, just remember that you heard it here first!

Largely a repeat of yesterday, same birds, same places at Bacton, albeit fewer of them and a couple of bonus Med Gulls and flyover Redpoll sp. We called in at Happisburgh last thing; the fields were full of pipits and Wheatears along with token Brambling and Lapland Bunting. A flock of GPs appeared and disappeared with a small wader hot on the heals; no great surprise that the Buff-breasted Sandpiper had gone missing for 3 days and we found Andy Kane watching it over the brow the hill; 10 minutes later it flew off high north with the GPs.  A brief search of the trees produced a few Phyloscs of both common flavours and a Common Redstart. The wind had swung back east again

29th September
East Hill (RoMa, JJG)
Ah, there it is. Autumn. With the weather charts screaming 'BIG' and the news from Shetland fevered plans were made to get onto the Hill. Alex had destoyed himself with a Blakeney-fest over the last two days and the tide on the table was too intimidating for him. A late tide yesterday for work meant 3 hours sleep, and an unfortunate lack of  food to carry on. Caffeine-fueled the excitement was tangible, helped by the fact that it was still Friday night on the Radio 1 schedule. Timings were such that we needed to cross the big channel by 6, requiring nocturnal marsh negotiation. From the first hint of light the sueda began dispensing Goldcrest and Redwing, Blackbird and Song Thrush piled out of any available veg. After multiple passes of the ridge over the course of the highest tide of the year the tally was, approximately: 2 Barred Warbler, 2-3 Yellow-browed Warbler, 4 Ring Ouzel, 1 Woodcock, 8+ Redstart, 1 Pied Flycatcher, 2 Reed Warbler, c25 Brambling, Tree Pipit, a handful of Fieldfare and scores of Robin. A Bonxie was moving past in the 30 seconds either of us looked at the sea. Barred Warblers, they really love this place. Maybe it's just us. The overwhelmming impression was of continual arrival, absorbtion into the habitat then departure inland, and we were both exhausted by mid-afternoon. Trawling some of Lodge Marsh produced a group of 4 Little Stint.and the least expected record of the day: a ropey looking red colour-ringed Sacred Ibis flyover.
After rehydrating on land and making an emergency chip stop we returned to Warham, where far fewer migrants were evident with far more residents. One thing you don't get offshore is shrikes however, and before long we were watching a fine Great Grey chasing and nailing a immigrant Robin in the small westernmost pit along the greens. One further Redstart called in the sunset to signal the end of a very good day.

A brief potter-round east (in some degree of pain) calling in at Cantley (5 Little Gull, Spotshank) en route wasnt too productive. A Ruff kept company with Golden Plovers at Bacton along with a couple of Redstarts and Wheatears and lots of crests. Trimingham Cliff-top Wood was quiet and a quick blitz of Cart Gap produced Chiffchaff, Willow Warbler and more crests but not the hoped-for Blue-robin.

Same team, same plan, we arrived at the coastguards just before , the wind had picked up over night and conditions for finding small passerines were not ideal. The combination of a high spring (marsh) tide and northerly winds had also combined to put most of the point underwater, which certainly made it feel all the more mega. Incredulously we met Ilya on the way back  he had arrived an hour before dawn Si, got a brief view of an interesting looking Phylosc and in looking for it we tripped over a confiding Lap Bunt. Many migrants seemed to have cleared out overnight but there was some changeover, more thrushes, less chats for instance. High water levels diverted us out to Far Point, which was quiet aside a few Wheatears, a Brambling and a Yellow Wagtail (flight views only but maybe thunbergii) . Returning back we met up with Macca and co; Andy Cristinacce had just found a Great Grey Shrike and the former had just flushed a Quail. We bade them farewell and almost immediately relocated the shrike about 500m south of the Lifeboat Station, it then promptly went to ground again until late afternoon. Andy C offered us some hot beverages; a Goldcrest also chose to take shelter in the tea-room at the same time, and was extracted by (after it had fed up on the contents of spiders webs). Post refreshment we blitzed Yankee Ridge again, turning up the first Redstart of the day. More thrushes (including Fieldfare) and crests seemed to be arriving; we jumped the creek back to the boat-landing and in the space of 1 minute kicked a Pied Flycatcher, 2 Redstarts and a Ring Ouzel. Hot Gen from Soar about events on Shetland left us galvanized and a quick scan of the mud revealed a newly-arrived flock of 13 Little Stint with Dunlin and a Curlew Sandpiper. This was the peak however and a slow march back in deteriorating conditions didnt deliver more than a Willow Warbler; at least we were back at the car at dusk (rather than 2 hours after).

Spring Tides only accentuate the rare feel of the point, although they do make checking it all that much more difficult (AL) 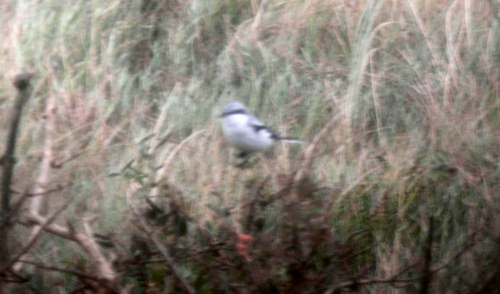 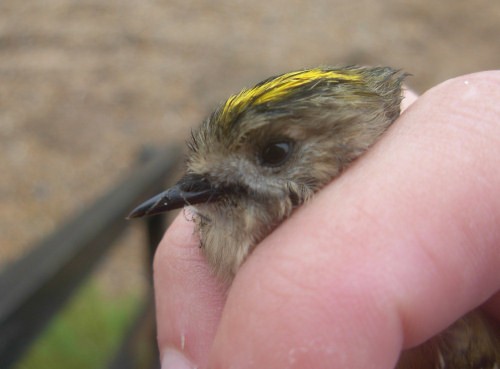 Primed for the off, news of Greenish at Wells was enough to cause a rapid desertion of the office, picked up Si Mitch and headed north. Goldcrests were evident in the first 30 metres of the point and expectations were typically stratospheric. In addition to the crests, the stretch between the Coastguards and the Watch House also held several Wheatears, a Lesserthroat, Redstarts and a Stonechat along with good numbers of thrushes. The Hood was slow and we left Tony Marr maintaining a vigil there before ploughing on through the sueada to Long Hills (via the tamest Purple Sandpiper known to mankind), nothing better than a new Redstart there so we crossed the creek to rendezvous with Richard Porter and Andy Stoddart at the . We all agreed that conditions were looking good for a ; but that migrant numbers were still rather low. We pushed on out to the recurves; a skulky Greenish Warbler on Far Point the highlight (found earlier in the day by the wardens). Swinging back past the Plantation a Blackcap was new but by now the last of the light was fading and another fierce North sea squall came in-off to make the 6 mile walk back in the dark all the more pleasant. 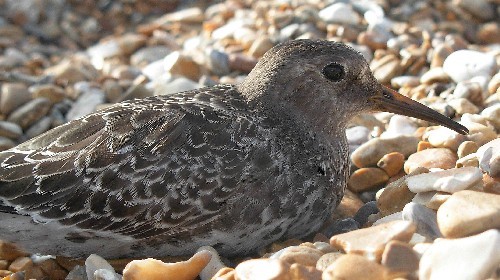 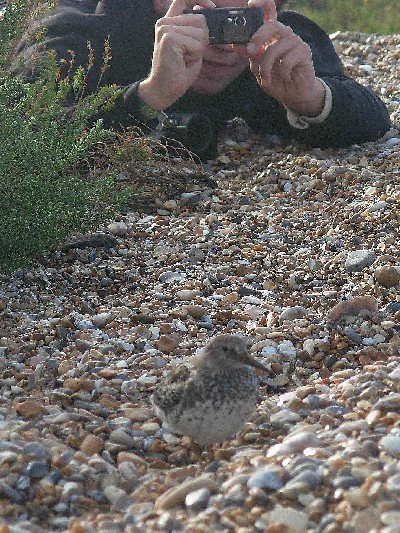 25-28th September
Tilbury/Mucking (RoMa)
Suprisingly pleasant few days in the Thames estuary culminating in some good 'sea' watching on Friday. Two groups of 4 Bonxie, or the same group, passed at 12:00 and 15:00 heading downstream, an Arctic Skua chasing Common Gulls and a juv Gannet went up to see the big city, but came back after a couple of hours.  Also Little Gull, Black Tern and a max. of 6 Arctic Tern hanging around the warm water outflow on Thurs. 2 Little Stint dropped in with the Dunlin and Ringos on Friday as well.

Decided that autumn might have started by now, but evidence was scant: one Redstart and one Spotted Flycatcher. Will try next weekend.


More intertidal survey a whole 1.5km from yesterday, but while there are virtually no Avocet at Tilbury the maximum count at Mucking today was 446. Two CV turned up for a few minutes as well, possibly same as yesterday.

Back at Tilbury as the winter appears once more, in fact most of the next month I'll be in Essex. Random late adult Turtle Dove and 2 Curlew Sandpiper were the highlights, with 2 Arctic Tern and an adder on the path for added entertainment. 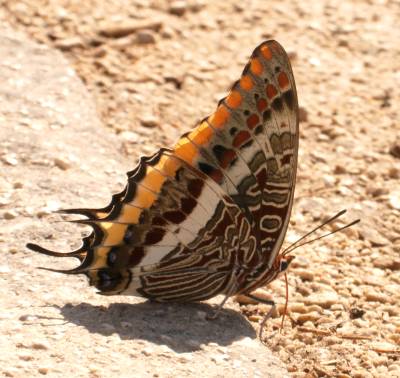 Dan gets some practice blasting a used Pec Sand, supporting cast included a couple of Curlew Sands and a juv. Long-tailed Skua, A Velv on the sea was early.

Dan's highlights from an ultra-brief Ireland trip were fairly minimal: pickings in the Emerald Isle being pretty thin this autumn, still the team managed said Semip at Ventry on the 6th &7th, a Ring-billed Gull at Smerwick 7th and a candidate atlantis type YL gull at Ferriters Cove on the 8th. Some token Eire scarce included a Blue-headed Wag at Ventry on the 7th, Little Gull - Ferriters and Smerwick (same bird) 6-8th and Little Tern at Blennerville on the 6th. 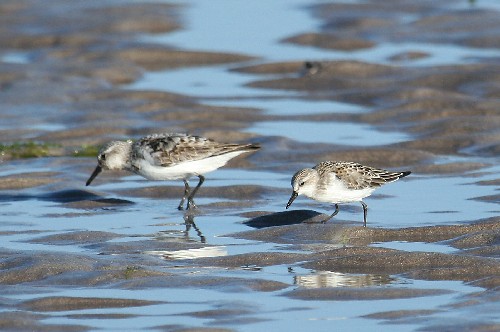 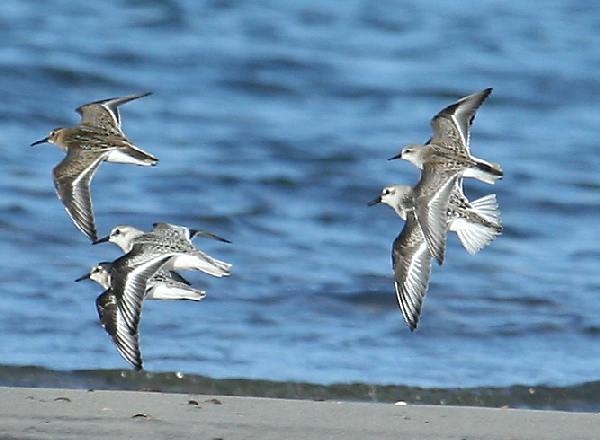 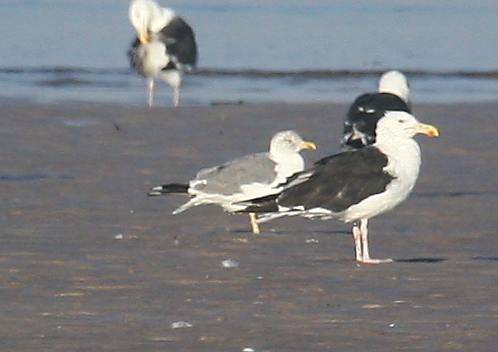 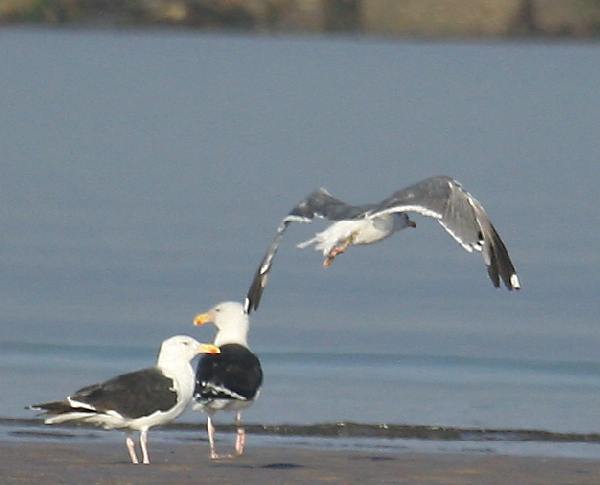 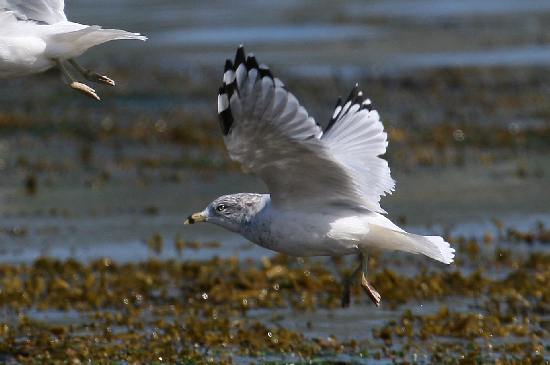 If you're not living on the edge you're taking up too much room.

Getting a Semi in Ireland is about as easy as putting on a hat these days, seems like a pertinent time to remember Keith's favourite story about MH, CB and... (I shall say no more).

With the regular pool by Earith fading fast we were disappointed to log just 3 Greenshank, 8 Dunlin and a Blackwit. With the words of Bob Dylan ringing in our ears we realised 'The times they are a changing' so we quit while ahead and went to start poaching someone else's patch five minutes up the road. With considerable aptitude someone had already reported 2 Pec Sands from Sutton Gault. Once we'd got our Pecker up the remaining waders included 10 Ruff, 3 Dunlin, 2 Wood Sand, 1 Spotshank, 8 Greenshank, 1 Redshank, 1 Blackwit. Snipe were common. That's what you get for attitude not aptitude.

Rob and Katherine are currently being married in Croatia for the next two weeks. Hot news today concerns Rob successfully tracking a Brown Bear to a group of plum trees. Monster views down to 10 metres apparently. Knowing Rob, he probably started a ruckus....

We'll do anything when the time's right.

The beet factory continues to produce the goods. Ten minutes at Tesco Xtra produced both Granulated and Demerara, as well as crippling views of iced bun. Sweet!

Bird-wise the action was also good. Upon arrival, yesterdays 3 Wood Sands were still present. However, 20 minutes in, this trio was eclipsed by a flock of 19 (!) that threatened to drop in but continued south. A few did come back though and by the time I left 5 were present. Greenshank numbers increased to 11 during the same period. There were birds on every pool, I had to make a decision. I decided to stay and look through them. Other waders keeping it real were 3 Blackwits, 3 Redshank, 12 Dunlin, 230 Lapwing, 20+ Common Snipe, 5+ Green Sands, 2 Common Sands, and a single Whimbrel (nearby field). Ruff-wise, I tried to shake a stick at them all, but this was not possible. Other birds included hunting Hobby and Sprawk, and the Little Gull. I'm hot 'cos I'm fly, you ain't 'cos you not.

Whitlingham Lane CP (SM, SB + everyone and his/her dog - thanks for that Kate and Bill)

A Little Gull flew around a bit, then left.

Waders included 3 Wood Sands, Blackwit and a Greenshank. A Little Gull and a Wheatear were nice. Small-Red-eyed Damsel-flie-s positively spiffing.

Slow going with Lesser Whitethroat, Yellow Wags and Wheatears the only passerine migrants. Good wader passage east along the coast with large numbers of Grey Plover and Sanderling in the mix. Loads of Barn Swallows and Racing Pigeons heading west.