In a bid to get involved with the hot new West Pal listing craze, I went to Majorca to clean up on some regional specialities like Balearic Crossbill, Audouin's Coal Tit and Moltoni's Nightingale. We managed to skor a couple of Woodchat Shrikes, but they were always too distant to see the relevant bits to be sure if they belonged to the endemic badass race. The only Subalp I found only gave me about two miliseconds of love before bunking off into a walled garden, so I couldn't tell if it went "purr" (local endemic) or "twat" (transient rubbish). In the absence of proper migrants (too early), I entertained myself by practicing with my new digi-blasting kit on some Sardies, producing these almost semi-professional results: 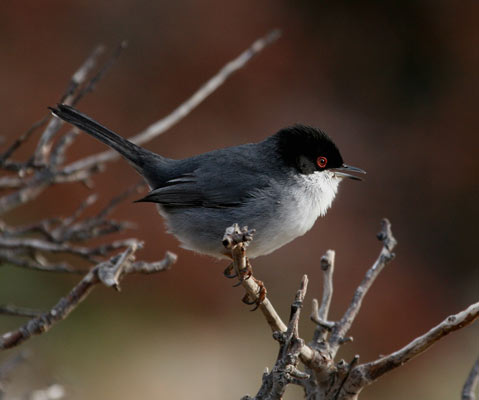 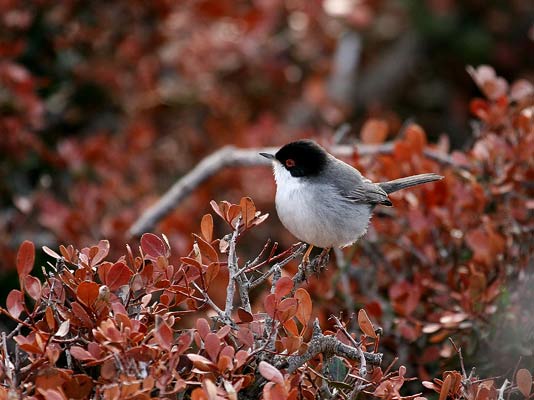 A shiny new camera - could this be the end of crappy record shots? Er, no... 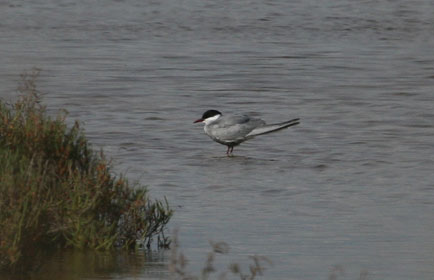 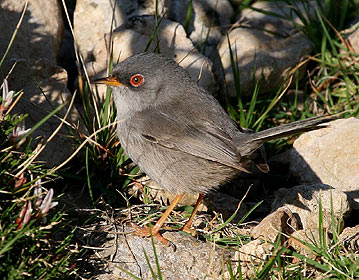 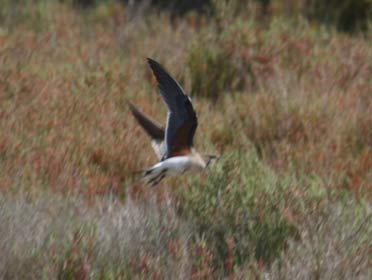 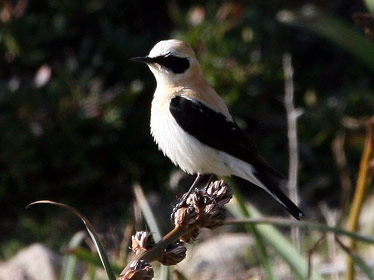 France: its different to Norfolk - just fity miles from the south coast of England but with an avifauna one might rightly describe as continental.  An afternoon walk in the woods produced Black woodpecker and Crested tit, whilst a stroll round some caostal lagoons gave us three species of egret and spoonbills and White storks a plenty.

Back in March, Rich was exiled to Berkshire to do some fieldwork. With no expenses available, he had to subsist on what he could find..... 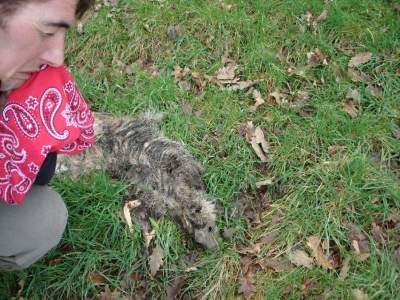 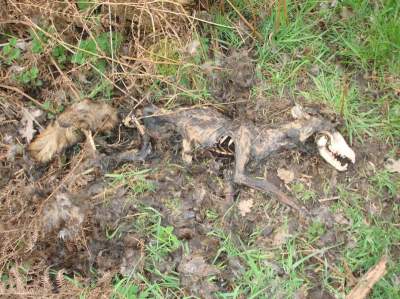 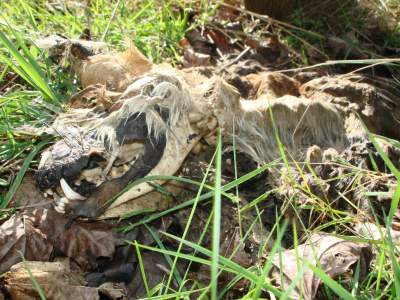 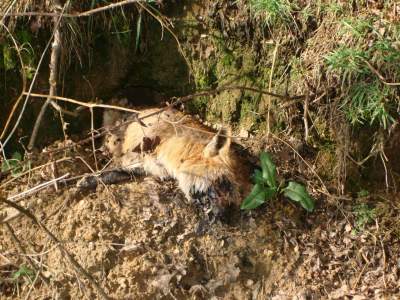 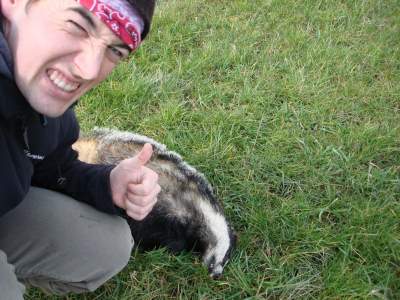 2 LRPS, splendid. Nothing else. 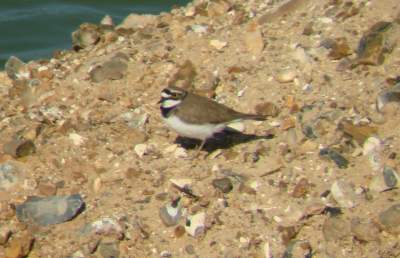 2 male Blackcap, a Chiffchaff and a bog standard female Great Tit to add to the 2007 B*"d R+p$rt.

3 LRP, 2 Oykes, 3 Green Sands, 2 Curlew, some ducks, 1 Swallow (and another at Foston). Is the Afrotropical-Palearctic migration system dead?

With two Bitterns showing the Bittern Hide was nothing if not well named, the Canopy Hide and Island Mere Hide also seemed aptly named - doing exactly what was said on the tin as well, hopefully work will continue on the "Mega Sibe Hide".  Also Sedge warbler, Small copper (a type of butterfly apparantly).

A pair of Lesser Spotted Woodpeckers called and indeed, drummed. The mere itself held Curlew, Redshank and some other rubbish. Will this be the new spring hotspot? No

We tried to find some arctic strays today, and we would've managed it if it wasn't for those pesky wigeon. Why do we keep looking at ducks? Is it 'cos the rareometer is still broken? Need to get the repair man out urgently.

Anyway, we found this female American Wigeon (ish...) on our way down to Arnold's Marsh. Some of the time it looked really good (esp. when the sun was in), but the head wasn't quite grey, streaky or blockheaded enough to fully convince us of purity (check this one...). We didn't get any pics of the underwing, but we can assure you the axillaries were very white. We reckon that this is probably well within the range of pure yank variation, but perhaps not classic enough to eliminate a hybrid. Answers on  postcard please...

Postscript - after looking at some pictures on the web-o-net, we can now draw three conclusions: 1) this is probably outside the range of pure American Wigeon, 2) this is almost certainly a hybird, and 3) anyone who spends any more than 5minutes of their lives looking at pictures of wigeon on the internet should take a long, hard look at themselves, drink some vodka and then book an 18-30s holiday to Ibiza. 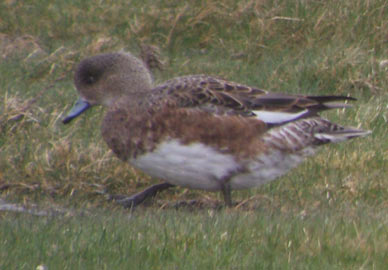 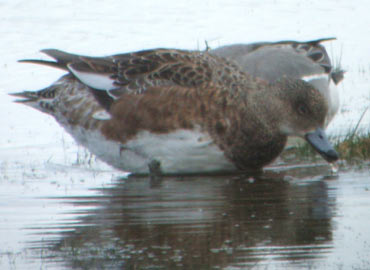 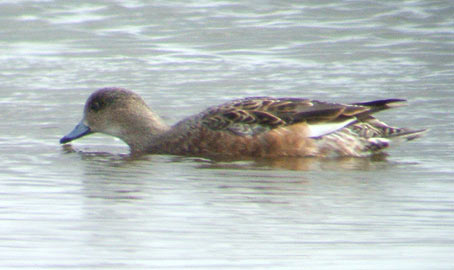 After all that fun, we had to cool off on the marshes at Wells, where a Firecrest popped up to remind us that real birds only sit in brambles.

Stonking White Wagtail gaily prancing along the eastern shore of the Great Broad in the pm. Green Sand numbers on the new workings had halved to a solitary bird. Some Shelducks, Oycs and the like also. Still no LRP.

A Jack Snipe stood out like the proverbial sore thumb amongst the marsh veg, like they do. Also 1 Pale-bellied Brent Goose. 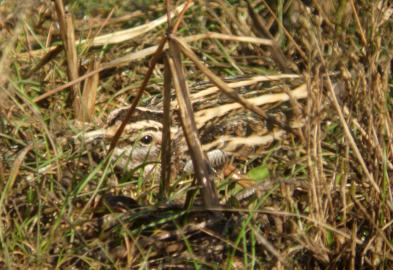 1 Little Gull (ad, but still all winter) kept boredom at bay during the 8 hours of shorefront survey with 4 Oystercatcher and 3 Curlew the only waders recorded.

Took my shiny new qualification out for a walk to see if it made me any better at finding the rares. First stop Burnhamn Norton, where I accidentally found myself looking at this ugly bastard:

After controlling the urge to vomit I decided to document the sighting for my growing "minging hybrid duck" library. It turns out it isn't even a new bird - according to Birdguides it was reported there back in November. Next up I drove past Roughleg  and Redbreasts in order to look for last winter's Little Bunting at Stiffkey. No sign surprisingly, just a handfull of Whoopers on the Fen.

After that the boredom set in and I went home to go through my amazing catalogue of wildlife pics taken during some recent surveys in mid Norfolk. Here are the ones I'll be sending to BBC Wildlife Photographer of the year... 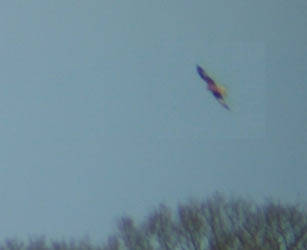 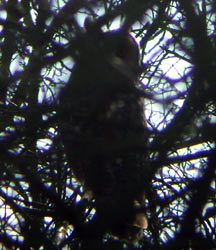 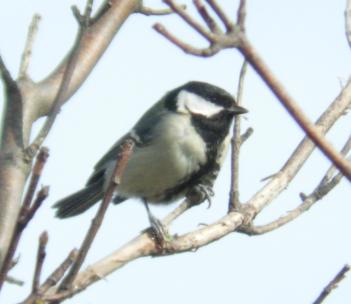 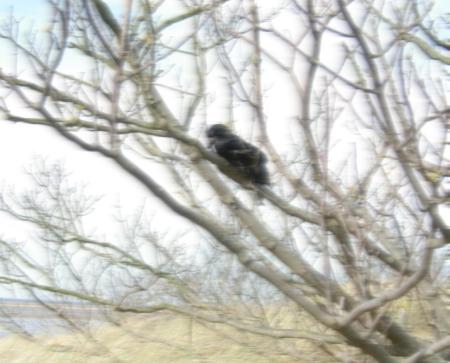 Any ideas? Eventually I nailed the id, after being given the run around the last bushes. Reveal later.

Spring was in the air for 4 vocal Chiffchaffs and 2 Reed buntings.  A weasel picked its way through some dead grass in the early morning sunshine.

Brief diversion on the way home from the office for a very pleasant late afternoon Great Grey Shrike and Woodlark fest. Luverlie. 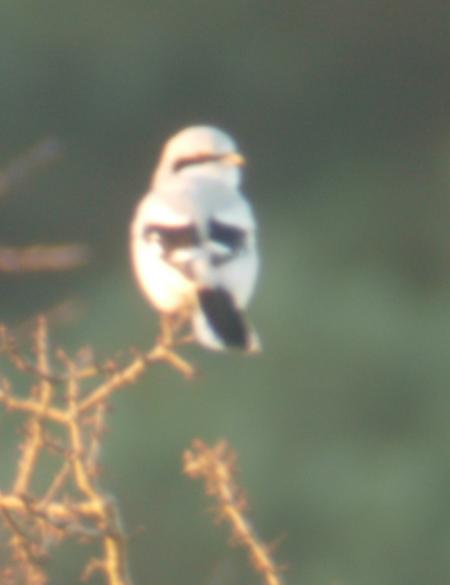 After deciding against a day trip to the Gambia I decided to entertain my parents at Holkham Park.  After seeing nothing of note we re-juvenated ourselves with some unseasonal ice-creams at Wells and headed onto the beach where Sarah found 7 Shorelark.