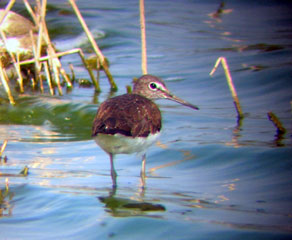 Green sand at Cantley (RMoores). Finders account for this beauty is in the pipeline.

One Greenshank, 8 Dunlin, 4 Black-tailed Godwit, 1 LRP, 1 RP, a swarm of seven Green Sand, a heard only flyover Turnstone and 44 Ruff.

Too much water plus too many Greylags equals no waders. 2 European Golden Plover flew through towards Hickling.

No water, no birds, just Greylag.

Dan proves yet again that the key to rarity finding is to leave the county of Norfolk. Down south for the weekend to attend a wedding, he sidled up to Pagham and found a MARSH SANDPIPER, plus a Spoonbill (found by Hannah). Ever the professional, Dan had forgotten to take his camera, so we're stuck with this classy phone-scoped image. We think the arrow is pointing to the bird, although it may just be a rock. 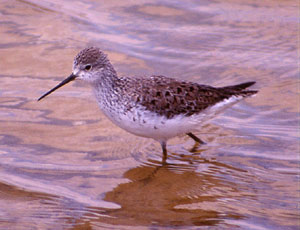 Left: Dan's Marsh Sand - it's in there somewhere. Right: This is what they look like when photographed properly (JG, Israel 1973).

Ruff in number at rush hill, but just one dunlin. A dark phase arctic skua came up out of a field between Martham broad and the A149. It headed off towards the sea - perhaps it had come inland in pursuit of a tern? The broad had adult little gull, single greenshank, common sand, ringo and whimbrel, plus a wigeon.

Red Kite hanging around in the dunes. 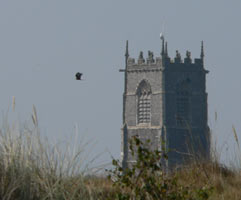 summer in Amazonia .... if you go down to the woods today....  carry a polyvalent Crotalidae Antivenom.