Dan consolidated his status with a relocation of the Ventry Black Duck (last seen in October - request to Irish birders - please go birding), this apart they didn't find any birds nor did they really manage to twitch much, as all trip members spent at least 95% of their trip feeling sick with alcohol poisoning and 5% of their trip actually being sick. Respect. All the best for the groom to be from Team PB. 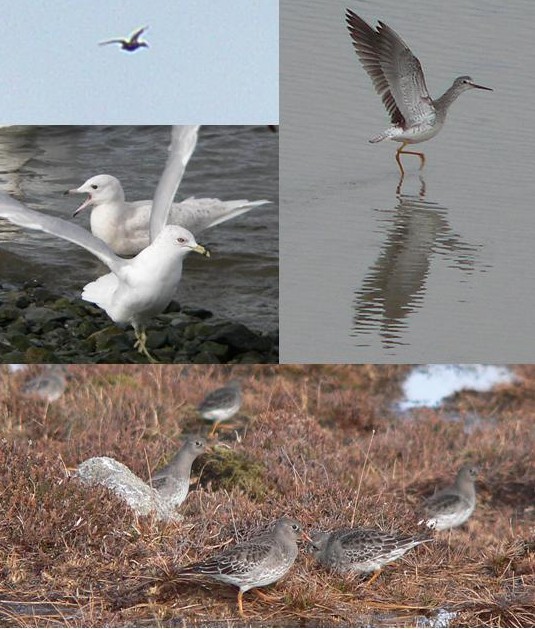 A week's dude-mungus family holidaying in the style that was acceptable in the 80's. The way foreign birding should be done - no guides, no sites, no bins, no list, just pina coladas, swimming pools and unfamiliar strains of streptococcus. We did manage a few birding outings, saw a couple species that would give Manhood the crazy-eye, and we even got to hang out with the president's crocodiles.  Highlights were a stonking African Swallow-tailed Kite found whilst dipping Bronze-winged Coursers at Yundum (irruptive Sahel specialist and mega rare on the coast), Ahanta Francolins and Yellowbill at Abuko (both normally rock hard apparently), Abdim's Stork at Sindaola (mega rare in Gambia, dross elsewhere), 28 species of raptor, some corking boat-billed opaca action and one reiseri / elaica thrown in the mix - highly educational and much better than all the bling rollers. Cue obligatory pictures of dross... 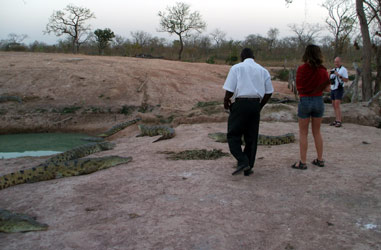 Meet the crocs. Is this really sensible?

No Shag, Busta didn't get any either.

A sedate bit of family-friendly twitching, nailing the first year American Robin to my British list after years of apathy towards the species. Still, it did take one to turn up within a mile and a half of K's parents house before I the tipping point was breached. As we arrived I was greeted by the sight of three RPS 'colleagues', demonstrating admirably awful twitching abilities by having dipped the diver and sacking off the Turdus after five seconds to think about giong to Haverfordwest. Apparently they regained their senses later and went home to watch the rugby.

6 Goldeneye, 44 Tufted Duck, 12 GC Grebe, 16 Gadwall, 5 Cormorant, 10 Little Grebe and 1 Pacific Diver, juvenile. Despite slurs on the character of punkbirders from shady bf characters hidden in the wilds of east norfolk (completely true and founded slurs I might add) one team member did grace this notable bird with an appearance. As it was only 25m from my location this weekend I figured it wouldn't hurt, and in fact it actually turned out to be rather pleasant. Video available now

Birding began when a drake Goosander flew over as we arrived, that was enough birding for one day so we watched the Pacific Diver instead.  Top bird, and a great way to celebrate my simultanious re-entry to and re-retirement from twitching.  The bird swam, dived and even roll-preened, allowing us to experience the vent strap, which was almost as exciting as it sounds. 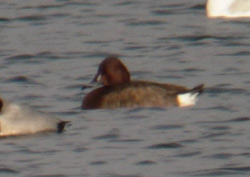 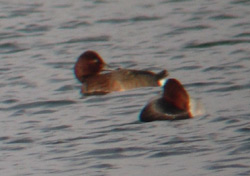 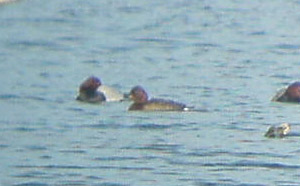 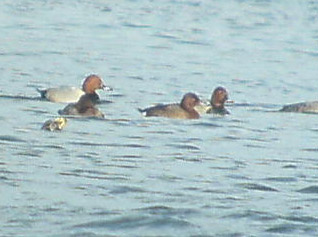 This duck was first seen at about 4pm on New Year's Day by a very hungover JG and a massively hungover RDM. In the semi-darkness, we couldn't decide if it was a pure Fudge, or just a hybrid. We've been waiting for it to re-appear ever since, and today it finally did... 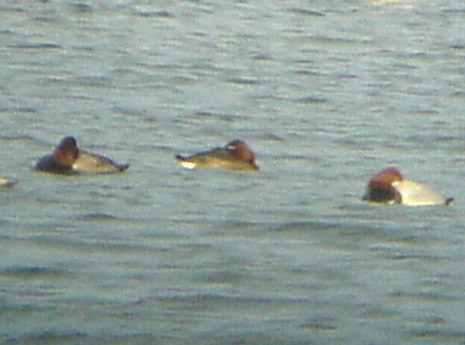 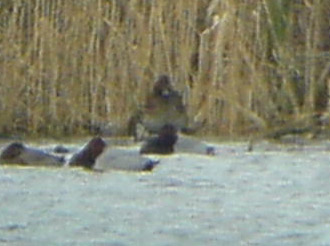 And it's just a lousy bloody hybrid! Albeit a very fudgy one. Sadly the bill has just a bit too much black on the nail, a bit too much blue, the belly is a bit too dirty (see above right), and when it finally flapped, the wing flashes were a disappointing dirty off-white. The other Fudge hybrid (a very pochard-like adult drake) is still in the same flock - so we almost have a complete set of nyroca genes on site...

Whilst filming for Punkbirder The Movie we were enthralled by a respectable passage of Little Gulls off Titchwell.

A drake hybrid Pochard X Ferruginous, like one of the ones pictured in Collins. Looks like a normal pochard, but a bit browner with a funny shape head and some weirdness on the bill. Hopefully tomorrow he'll bring his mum...

Drake Scaup on Filby Broad, probably the same that was there last year.

A walk along the coast in search of arctic vagrants produced a wintry selection, including Chiffchaff, Blackcap, Med and Little Gulls, Greenshank and the usual egrets and harriers - it was just like Finland. Eventually things looked up with 2 Waxwings heading west over the woods, but otherwise it was global warming all the way. 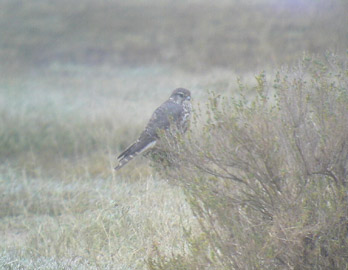 We've not had many pictures for a while, so here's a crappy Merlin.

Dusk brought a bouncing Jack Snipe out on the 25cm of remaining exposed edge, whilst a new drake Goldeneye and an old drake Goosander livened up the floating dross. An embarrasing peek at the Canada flock revealed a hybrid W*nker X Barnacle that we first saw on 2nd Jan (different bird to the Lesser Greater Lesser that was there last week). Kingfisher, Water Rail and Redpoll also appeared. I want to get a new hobby.

1 drake Goosander, 92 Gadwall, only 3 Pochard, 109 Tufties, 1 michahellis (1W). Added CT and TC to my Whit year list. No sign of spanner goose, thankfully, or anything interesting.

If i wasn't so cocking angry now, i'd be fuming. After having written the most hilarious, if not the most hilarious, account of Punkbirders trip to Italy, freewebs (the cheap bastards) suddenly shit on my doorknob and close the page without the changes having been made!! Maximal Bastards! Anyway, I have better things to do than try and recreate the extraordinaryness of the previous prose so I shall tell ye straight and true: we didn't see Rock Partridge where Rich Bonser had seen them, whilst still asleep and we didn't have a great night out. Buggeriso! I also didn't get to shag Francesco Tottis wife. Twati! Or slay some tigers in a big dome! Cockwrenchi! There were however the following bad calls: 'I just saw a partidge walk behind that rock', 'Sorry, it's a horse' and 'There's the colosseum' 'What you mean that small square office building?' 'err, yeah, sorry'.

These shockers have led to the following, For One Week Only features:

Partidge or Pony? Struggling to decide between See-See or Shire? Grey or, err a grey, errr? Then this is the quiz for you, let Punkbirder and its contributers sort out your partridge/pony puzzling posers, you ponces. Here we go... 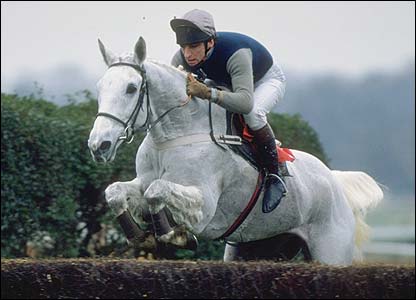 Partridge or Pony? You decide.

Colosseum or cockingly small and square building? Spannering around in habitations? Spazmoiding it up near mortar? Fumbling like a fool around brickwork? This quiz is here to help. Get stuck in!

Not much doing. A small canada goose appeared in amongst the regular Whitlingham w*nker flock. Probably one of those taverneri / parvipes in-betweeners. Following the BOU nomenclature, I guess that makes it either a Taverner's Lesser Canada Goose , or a Lesser Greater Canada Goose.  I tried reading about how to identify them, but that turned out to be even more boring than looking at the bastards in the field, so who knows. It is unringed, fully winged, very wary and obviously an escape.

Having slept for a healthy two and a half hours in the car in Oulu city centre (2 1/2 hours more than last night),  0950 the following day found us shivering on the defensive berm of the sewage works at Jätäri with 2 dozen Finns and their Finn-sticks. A far cry from the previous night's exploits. There were at least plenty of birds to look at, Waxwings passed overhead at 100s/hr, flocks of Meally Rolls contained at least one Coues' Scandinavian Arctic Hoary Redpoll; a Glauc flew over, but for the first half hour the tit of our dreams was failing to warm our cold feet. Fortune favours the hungovern however and AL picked the Azure Tit on the periphery of human vision and before long it was semis and shouts of "Valkopäätiainen!" all-round as the bird gave itself up good-n-proper. Only Rob got any film, but if you want some detail see here for images. Azure Tit, good on paper, even better in reality. After that nothing could compare, well, Rich needed a lens cloth after a flock of caudatus Long-tail Tits but you get the idea. We checked suburbia nearby for Pinebeaks but drew a blank; Rich picked the asiatica Nuthatch on call but only Rob saw it before it disappeared and Rich also got on another exilipes. Driving through town trying to find the uni James answered his critics by picking up a flock of Pine Grosbeaks at 100m range as we passed them at 80kph, some defensive driving later we were on top of the beauties. With daylight fast ebbing away we drove the short distance to Hietasaari where we nailed 2 -3 Siberian Tits, a Hawfinch and more of the regular Scandinavian fayre. The drive back to Tampere, shared between  the RM's and AL was enlivened by a 4-hour blizzard and visbility measured in micro-metres....

For the start of the Euro-weekend season we decided to forgo Optic and go out in Finland. As a bonus, there happened to be some birds to see too. We left Norwich with AL at the helm @ 0230: after briefly being arrested at 0238 we made Stansted in good time and carrying our carbon guilt made Tampere by 10.40. With only 1 1/2 days in the field there was little room for procrastination. Our original plan, the Pori Dusky Thrush was seen by Batty et al. the previous Saturday and wasn't available to Lowe & Co. the following day or thereafter. The stakeout Great-grey and Ural Owls down south seemed both too far and too Eganized (on Youtube) so we decided to sack them off as well. The day's twitching was left to the stonkingly-rubbish Hawk Owl on the edge of a smelly housing estate in Tampere, good on paper at least. We briefly tried for the Ural Owl (last seen in mid Dec) nearby but had to make-do with borealis Willow Tits and other northern common (Treecreepers, Bullfinches etc). We headed SW on limited directions for a Great Grey Owl (probably last seen in Feb 2002) and whilst dipping picked up Hazelhen, Black Woodpecker etc. Daylight exhausted we switched Rich for Rob behind the wheel and blasted north through the blizzards with only magnetic north and a bottle of spiced rum to lead the way. We roled into Oulu at 2330, parked the car and finished the rum. We checked into our "accomodation" @ Club Onnela shortly before midnight and proceeded to have the best night any of us could remember for some time. 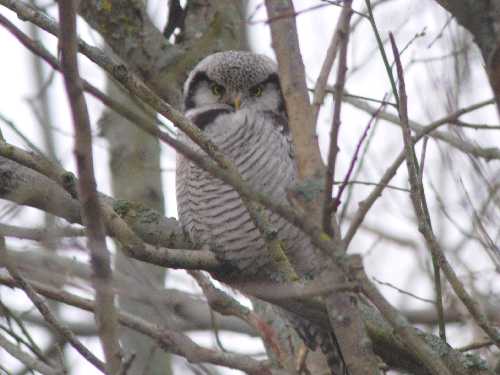 Patch year ticks - wigeon, fieldfare and lesser redpoll. Also lots of pochard still, two goldeneye and a bunch of lapwings. Can't wait for the grebe / smew season to kick off.

Counting ducks in SW London produced a tally of 5 Great Northern Diver (2 at both Staines and Island Barn Reservoirs and one on the Queen Mother), 3 Black-necked Grebe and 5 redhead Smew spread across the waterbodies. 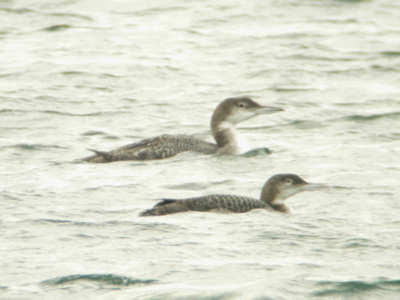 A first-winter Caspian Gull appeared in the midst of a healthy pre-roost movement - probably the first confirmed record for the lane. Several michs also seen, and the drake Goosander and two Goldeneye were nice dcuks, but the Pochard flock has dwindled to just 50. 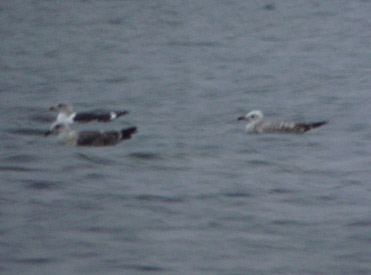 This Caspo spent about 10 mins at the lane before heading off to roost on Breydon Water with the rest of Norwich's gull population.