Despite snowball UK, eurozone economic meltdown, mass abandonment of jobs and epic flooding Katherine and myself headed into Spain as pilgrims to worship at the altar of the Pardel Lynx. In fact, it was a highly enjoyable and relaxing stroll of a trip punctuated by convenient fortune, which was most welcome. And the cat purred.

Go here, the excellent mammalwatching website for gen. The area around La Lancha, in particular the section between c5 and 6km along the JH 5004 from Los Escoriales is the hot bet for success. We had no problem finding the best spots as there were dozens of hardcore Spanish mammal watchers strung out along this entire stretch. It was a Spanish national holiday weekend, but even so we were amazed at the number of people present pre-dawn with Zeiss and Swarovski scopes scouring the landscape. And more than a third were female. And some of them were hot. Its like a different country.

If you fancy picking one up yourself, a Lynx that is, just remember to check underneath any chattering Magpies for a cat. Couldnt be simpler really.

At the time I booked the cheapest option was Ryanair flying Stansted to Málaga as there were some taxes-free flights. Holiday Autos gave us a car via Centauro Rentals at £33 for five days. I booked a compact and we got a Ford Focus. Bargain.

We stayed at the Complejo Turistica Los Pinos, which does have an excellent restaurant and is overrun by Azure-winged Magpies. Try the Perdiz, or the Carnes de Monte.

It took just over two hours to drive from Málaga to Los Pinos via Córdoba on the excellent Autovias.

3rd December 10: landed Málaga 20:30, were picked up and given a car, I drove, arrived Los Pinos 23:30, ate in restaurant from midnight onwards.

4th December 10: Lie in, Los Pinos, café con leche, Visitor Centre (bought an excellent map), Andujar town for some pork products, Manchego cheese and Crunchy Nut Cornflakes. Rio Jandulár then to La Lancha. Night drive back to Rio Jandular then back up to La Lancha before returning to the hotel.

After being gripped off by a Spanish couple at the concrete blocks overlooking the Rio Jandular who had seen Lynx two days previously at La Lancha we went to La Lancha. Nothing doing in the two and a half hours to dark except loads of Red Deer and a few Fallow, and a further bout of nothing but masses of deer during a couple of hours driving and spotlighting after dark.

Some apprehension then on the drive up on the second day that perhaps this cat needed more time than Id hoped. Arriving for dawn (just after 8am, no really) at the viewpoints along the La Lancha road (along with at least twenty watchers) I set up and began scanning. All was quiet until, at about half eight a few Magpies began chattering in the valley below to the west. I sauntered up the road to get a view down to the area from which they were calling (an inconvenient tree and several Spaniards were blocking the corner), put my bins onto the calling birds and straight onto a Lynx. Stood next a small stream, stationary and completely in the open. I couldnt move or speak for at least ten seconds, then managed to compose myself enough to kind of whisper/shout LYNXLYNX! at the nearest group of people. The beast began to climb the hill, passing one of the largest cork oaks in the valley then heading into the scrub. I got the first few observers onto it, fortunately for me this included Katherine! After a minute it was gone. Such a great buzz. It had been somewhere around 400m away, which seemed pretty close!

Sighting two came about 09:25. A shout from up the road had everyone running up a couple of corners to another group of watchers. A Lynx was sat in the open about a kilometre away. I managed a couple of token shots before it slinked off, accompanied by Magpies and scattering Rabbits from its path.

Pretty much everyone managed to see that one so the crowd (up to at least 38 people) relaxed considerably. Fully expecting to see this same Lynx reappear it was something of a surprise when the next beast appeared just to my left, only about 25m away just below the road. It had bounded across a small opening between bushes, in view just long enough for me to register and call out. With the number of eyes watching it was quickly seen again, but skulking through the base of the bushes and no more than a dark shape. But after a further forty minutes or so it was seen again, maybe 300m away, and it was pinned to a small cluster of cork oaks, bushes and rocks with clear ground most of the way around. If it moved, we would see it again. Eventually it appeared, preceded by a volley of flying Rabbits and attended by a couple of sentinel Magpies. It strolled out nonchalantly, a study in elegance with a rangy gait, lithe and athletic feline body and silly, stumpy, ink-dipped tail stuck bolt upright. Upon reaching a particularly large cork oak the beauty stretched out and scratched like a bad kitty on the arm of a sofa, then sauntered off into the brush. But it wasnt finished. Five minutes later it reappeared, stalking up the hillside away from us and onto a dirt farm track where it paused to stare us down, from over half a k distant. It knew we were there, wanted us to know that it knew, and also that it definitely was not walking away because of the stupid people on the road. It just happened to want to go that way. So it did, and once more melted into the brush.

This couldnt be topped, and with clouds beginning to bulge overhead we took our chance to drive back and get some celebratory lunch. It tipped it down, but we headed out again in the evening along the Rio Jandular. Our final Lynx sighting was somewhat unexpected, in that we had been attempting to head off an otter that wed seen cruising upriver towards the dam, but were soon interrupted by three of the Spanish guys from the La Lancha watchpoint this morning running towards us to say a Lynx was coming right at us. Blast him, Ned. Five minutes later the magpies called it again, and out of the gloaming appeared the final spotty apparition of the trip. With dense vegetation around the river it was a brief sighting, but again staggeringly exciting. This beast was only about a hundred metres distant.

So, easy right? Well, maybe. But for the other two Brits that were up on the watchpoint this was their tenth straight day, and first sighting. Granted, they were hindered by owning a Canon 800mm lens with 1.4x teleconverter with a Wobberley head giving them as much manoeuvrability as a pinned stick insect. So it is possible to dip this cat. It is after all, a cat. But you have an excellent chance of good views and multiple sightings of the rarest and just about most beautiful of mammals in a stunning setting in mainland Europe. 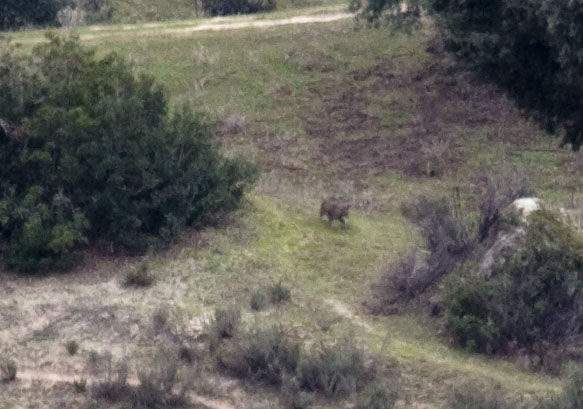