Mega-roost is still present - Common Terns were arriving over the town at about 100 per minute for at least an hour and a half prior to dark. Vast majority are now juveniles - it must have been an amazing year for sticklebacks... Single adult Black Tern in near full summer plumage was the highlight, along with 2 adult Little Gull, 2 adult Spotshank and 80+ Med Gulls.

In a bid to rediscover a bird seen only twice in human history (unfortunately referring to the individual, not the species this time), we went to look through goldie flocks at Snettisham. A 6.7m tide meant headache-inducing bird numbers on the pits and marshes, but the the only painkillers came in the form of some mildly panecetic Garganey and a softcore Curlew Sand threesome. Attempts to avoid the holiday traffic produced a male Monties over some fields near Ringstead, and a pasty-stop at Titchwell produced juv Little Stint, 10+ Curlew Sands and no Temms. We were also treated to a demonstration from HM Coastguards of what happens when unexploded ordnance becomes exploded ordnance. Finally we got to Cley beach carpark, where we were informed of all sorts of crazy rarities turning up everywhere, including an Ortolan at the hood. With our interest half-raised, we headed down the point, but five Whinchat, two Wheatear and two Whitethroat were all we could muster. Six juv Curlew Sands sped west along the shingle, a Black Tern drifted high over the point and a Short-eared Owl was rudely disturbed from post-migration slumber on yankee ridge. No yellow breasts for us.

The big one, four years in the planning (or at least in the intending): a five-day expedition along the BR 163 (a) into the unknown in search of a little yellow bird that has been seen twice, ever. Made good progress on day 1 until we reached the Serra where we got stuck about 2300, after digging ourselves out all the electrics in the car died, so we had to await the morning. Birding the campinarama early am produced not only the expected white-sand and cerrado specials such as Pale-bellied Mourner, Cinnamon Tanager and Black Manakin, but also target 1: Caatinga Antwren (b). Having fixed the car by daylight we continued on past the waterfalls of the Curuá (c) and made Novo Progresso by 0200. The 2002 rediscovery site was now just open fields and we had to travel a further 20km to find some disturbed forest. At 0730 the following morning I heard the distinctive song of a Lepidothrix manakin and managed to obtain brief flight-views after playback. In the process obtaining the first recording of the voice of GOLDEN-CROWNED MANAKIN. It wasn't until 0700 the following day until I managed to get good views of a male at an "exploded lek" in thick vine forest. The photo (d) was a shaky video-grab through the bins, no other images obtained after a further hour of trying before they fell silent. In between times, other significant sightings include a big range-extension for Curl-crested Aracari (not previously recorded in this drainage basin) plus Kawall's Amazon, Coraya Wren etc. The journey home at an average speed of 30km/h was uneventful, negotiated a few bandits, wrecked the car some more, saw some Hyacinth Macaws and ran over a monkey (a male Brown Capuchin).

(a) (the worst) "Road" in South America, the very good reason why so few have tried for vilasboasi

(b) Caatinga Antwren (Herpsilochmus sellowi) - described in 2000, the taxonomic status of this disjunct population on the Cachimbo may yet change (Bret Whitney pers com )

(c) Cachoeiras do Curuá, visit it now, this will all be destroyed in an HEP scheme already underway

(e) Hyacinth Macaws (Anodorhynchus hyacinthinus), I found them to be common on the north side of the Cachimbo

Ah, distinctly I remember, 'twas in the bleak December when each seperate dying ember wrought its' ghost upon the floor, I dreamed of early autumn and all the wader scrapes I would explore. And find a load of sh*t.

Very rainy and also very dark. Managed to sense 1.Greenshank, Curlew over, juv.LRP and the usual sandpipers. Water level higher than it wants to be, the bastard.

More fun on the marshes, with single young Red Kite, a princely 13 Marsh Harriers and a possible Continental Least Weasel.

Black tern - 1 juv in/out. Curlew Sand - 1 juv - these seem to be in very short supply so far this autumn.

Harriers lining up on the flats, waiting for the next yank wader to arrive (DB). 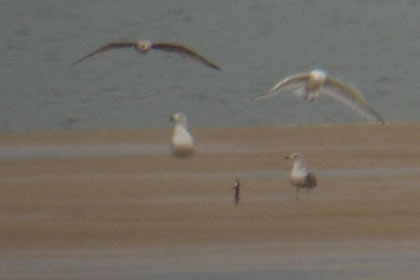 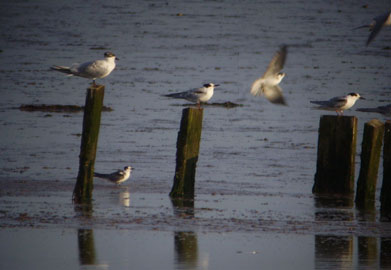 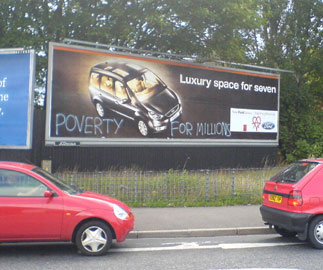 Black Terns (x2), and street-art with a conscience.

Photo on the left (below) depicts an juvenile (presumably female) Grey-bellied Hawk (Accipiter poligaster), that on the right an adult (presumably male) Ornate Hawk-eagle (Spizeatus ornatus) (in my hand). I had previously seen two adult poliogasters which are fairly unremarkable apart from their rarity. Quite why the plumage of the stunning juvenile has converged with that of ornatus is baffling. Mimicry of Spizeatus hawk-eagles (and Buteo buteo) by Pernis honey buzzards is justified in that they might run a lower risk of predation from Accipiters....Note the crest and feathered tarsi of the Spizeatus and plain white upper breast of Accipiter. The mega doesn't stop there either, more photos including Pavonine Quetzal here. 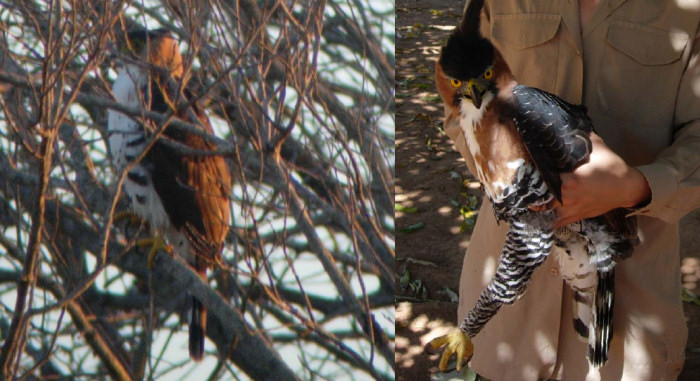 The rareometer comes good with an adult BUFF-BREASTED SANDPIPER found by Rob and James out on the salt marsh. Details and more pictures in Rob's Diary. 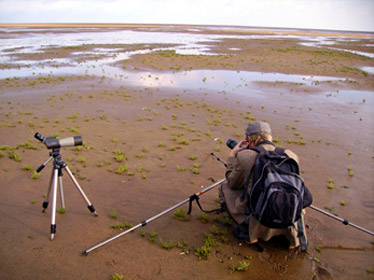 Just Ruff, everything is on Swim Coots as the levels are too high on the Hill.

Big day in the wash. Great view from the Trial Bank, useful when we were informed of White Pelican tracking the coast. Took a while but eventually I picked it up: initially miles to the east in Norfolk (11:35) but it kept circling west and I watched it to 12:03, disappearing over Gedney. Knew we should've shot it, then it would have got accepted. An adult winter Black Tern came close by the island as well, as we fought off the ravenous greenbottles. 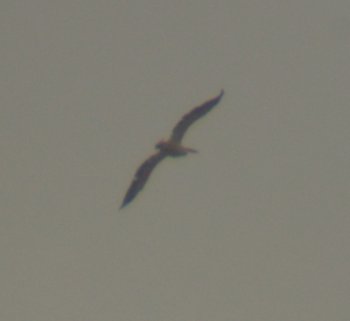 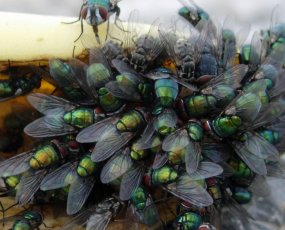