a comprehensively incomprehensible trip report is under construction, suffice to say a visionary itinerary but some bad luck. We deserved at least a Cahow... 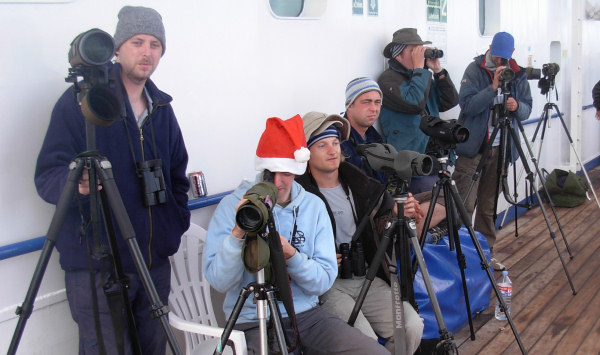 Team Biscay; you can never have enough comedy hats/hat combinations at sea...

Once more to the Crunch, Hills beckoned, the air thick with Fenno-Scandinavian promise, out on the marsh Whinchats adorned every bush: one bush in fact on the brink of collapse under the weight of 12 of the little buggers. Northern Wheatears adorned the strandline and the lone brambles held a couple of Willow Warblers and Common Whitehroats. A distant scan of the pines revealed the presence of the irrepresible main man Mac, and instantly promoted thoughts that we might already be to late on our quest for a new Greenish one. The first thrash produced Pied (3) and Spotted  (1) Flycatchers, 10 Garden Warblers, 2 Common Whitethroats, 25 Willow Warblers, 2 Chiffchaffs, 8 Lesser Whitehroats, Sedge Warbler and 2 Groppers. Mac had the two 'necks staked out and had heard an odd Acro chack from bramble. Alex heard it on the first thrash and the three of us returned an managed to 'gently persuade' it to show after a half-hour sit didn't serve us with views. JG's trusty DS delivered some iconic images of a warbler that showed a suite of features that were better for autumn palustris than the more obvious alternative. In depth analysis in the forthcoming Acro-Special. A call for news was bleak: (the next day was worse) although we were trochiloidely challenged every other frickin site in coastal Norfolk wasn't. Maybe we could have chumped it, but at least the return of the Mac to hills suggested that absence of evidence may indeed confirm evidence of absence.  On our way back James found a Barred Warbler, mmm what's the ratio of those to Greenish right here right now? We woz robbed. 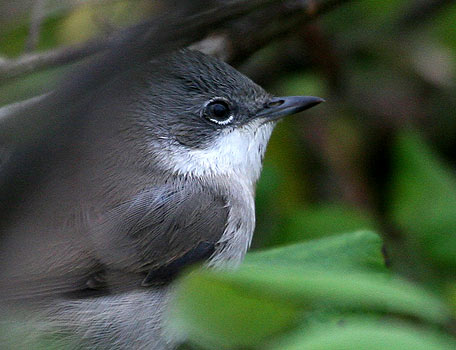 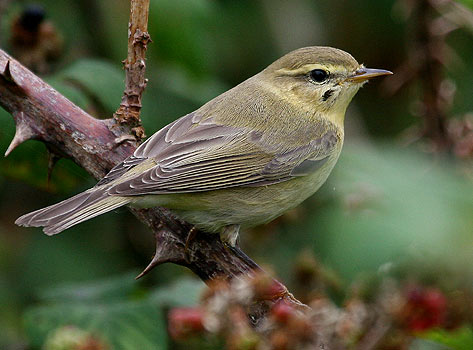 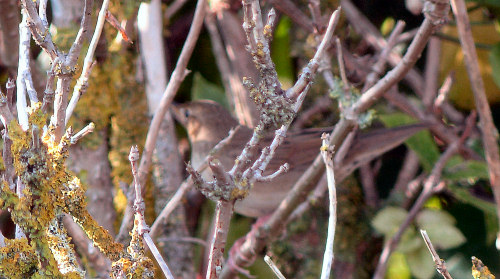 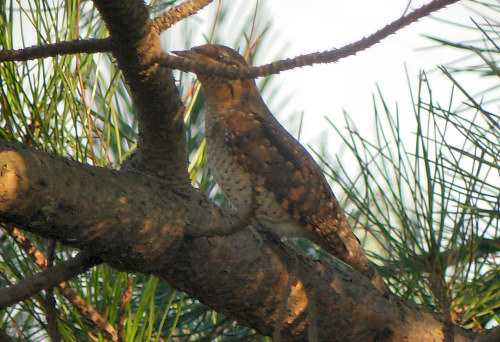 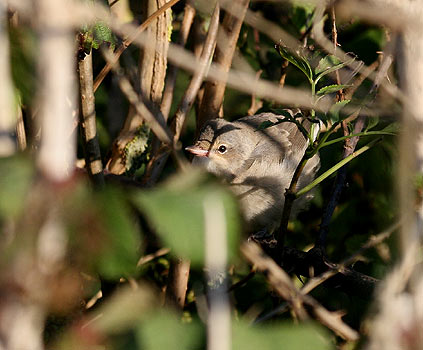 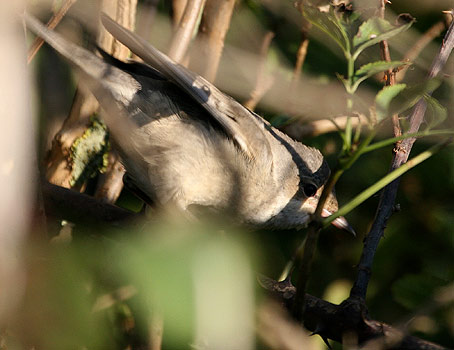 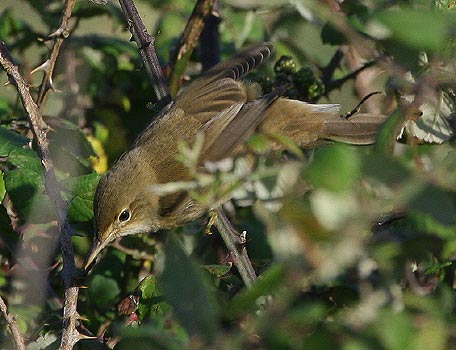 Wind, rain, cloud, all moisture from the atmosphere departed to be replaced by the most glorious bright and sunny weather.  Still some migrants around, still no Greenish. Grasshopper Warbler, a Tree Pipit, Spotted Flycatcher, a Redstart, Garden Warbler and 6 Willow Warbler was the haul. Lovely.

Today we set up the first fully controlled double-blind experimental test of the age old question - "which is better, Hills or Point?". The answer:- Point, of course, you bloody idiot. Of course it's better, it sticks right out, it's got a whole book written about it and everything. Anyway, I sacrificed my trochiloides in order to prove the blatant truth we all already knew. I crossed the last channel at 07.45, headed out onto the shore and got blasted halfway back to Wells by 3 kg cm-2s-1 of sand thundering off the outer marshes. Fortunately the pine belt provided ample shelter. Perfect, I thought, I'll just sit here and wait for the birds to flood into the sheltered sycamores. Three hours later and all I had was a couple of losy Willows and a Little Gull crawling east over the marsh. A quick walk on the seaward side revealed that the migrants were all loving the gales and rain, flicking around in the marrams and completely ignoring the good habo'. So I had to do it the hard way, walking every inch of grass, bramble and sueda on the marsh. The sum result wasn't too bad - a couple of nice Wrynecks (more than there were on Blakeney!), a pair of stonking juv Long-tails that passed right over my head as I picked my way across the marsh, and a reasonable bag of migrants:- 30 Wheatear, 15 Whinchat, 1 Pied Fly, 20 Willow Warblers, 1 Chiffchaff, 5 Lesser Whitethroat, 3 Common Whitethroat, 2 Garden Warbler, 1 Reed Warbler. Enough for a Greenish, you'd have thought... Anyway, not a bad day, but it was no Blakeney, and not enough to compensate for the misery of the previous evening...

Picked up Si at just gone 6am, 'rolled' into the beach car-park at Cley before seven, instant Wheatear was promising and a Little Stint headed west down the point. Grey skies, squalls and gale-force winds meant that getting anything more than a 2-second flight view of passerines was going to require fieldcraft more cunning than a crafty fox pronounced professor of craftiness at Oxford Universi... But I digress, we sacked the sea, it looked great and occasional glances over the shingle bank revealed multitudes of skuas and gannets on the move, but the prize was never going to be pelagic so we ignored the bait. That said it was so windy that most of the terns were passing over the marsh accompanied by Arctic Skuas, a Little Gull and lots of Kittiwakes; I picked a candidate juv. Long-tail but too late as it disappeared across the Harbour. The bushes between the blue boat and the Watch House (1/2 Way) dealt a couple of Redstarts, Common Whitethroat, Whinchats and Wheatears. Way out back towards Cley more shapes loomed in the mist and we decided to leave yesterday's 'used rares' at the Watch House for the masses. The Hood was rubbish but Long Hills held more Willows, Lesser-throat and team Macca. In typically High Spirits he had cleaned up the previous evening; after Rich Porter and co. had slogged it for nothing all morning, they left their plantation vigil to twitch a Greenish new in at the Watch House, whereupon Macca checked the Plantation to behold a Greenish trailing an Icterine round and round. He followed that up by delivering the rare-ometers predicted Great Snipe accompanied by the other Blakeney wardens....

So after getting the low-down we checked the Plantation. Reed Warbler, Garden warbler, 3 Willows and 3 Spotted Flycatchers were immediately evident, however the crowds had already arrived and we left them to refind the Greenish (unless anyone has any evidence to the contrary [i.e. seeing two together ], there was only one in the Plantation  a well-marked bird with a hint of a 2nd wing-bar [JM pers com.]). The rest of the afternoon was spent repeatedly working the far recurved ends, each foray produced a different selection of birds on each spit but typified by both flycatchers, redstarts, chats and Willow Warblers. We picked up Busta whose optimism increased when Macca picked up a Greenish on Far Point and pointed out that we had chumped a Wryneck at Near Point (which we managed to relocate). Another squall added insult to injury when JM had us and (the same?) Juv. Long-tail in view as we turned our backs to the driving rain. We continued long into the evening, calling it a day with the last of the light, arriving back at the Coastguards carpark at 8pm with considerable head/back/ankle pain, over 13 hours after we had set-off. Easily 25km on shingle clocked up. Our final totals of grounded migrants were as follows:

Very modest numbers but a sprinkle of quality nevertheless: at least 5 Greenish Warblers arrived on the Point over the two-day period  2 (3?) at the Watch House, 1 in the (pending news on the rptd 2nd bird) and 1(2?) on the far recurved ends; a spectacular arrival! Where were the Tree Pipits, other Wrynecks, additional Ickys, or is the Continental avifauna as impoverished as ours now? 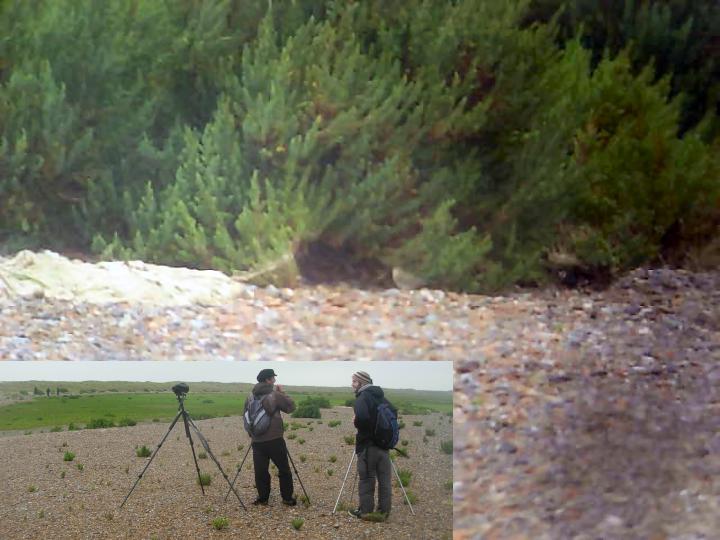 Greenish Warbler (hyper-crap video-grab) and watchers Middle Point, at one stage this beauty was sat under some Suaeda sheltering from a squall next to a Pied Fly and a Whinchat, we couldn't find any bushes big enough to fit under... (AL)

Continued the patchwork poaching someone else's birds with the aid of optics. Predicting a biggie GotWood Sand amongst assorted Tringa, Callidrid, Charadrid folly.

Holding onto my conviction that the chart looked fairly monster, I was out on the hills by 9am. No sign of a fall early doors, but a few Wheatears, Willows and a Whinchat suggested that something might happen. After midday a couple of Pied Flies appeared, and a vibrant chaking indicated the arrival of a Gropper, which eventually showed itself in the brambles. I was spurred on, but by 3pm and with nothing new in the bag, I was running low on food, energy and optimisim. A quick gen check didn't help, being along the lines of "still naff all on the whole east coast", and by 3.30pm I was heading for home. Note to self - improve your staying power. A couple of miles down the coast, about 15mins after I turned tail, all hell started to break loose in a Scandi-rares fest on the Point. Sadly, the first I knew of it was when I got home. Only option was to down several  beers, hope the excitement wouldn't keep me awake too long, and make big plans for the morning...

The autumn has landed, but we weren't ready, despite the rareometer's predictions, I had to spend the day generating graphs and doing stats, James was on Hills with the finger on the pulse, it seemed quiet. Then a Barred Warbler was found at 1/2 Way. I choked, logged off and ran for the bike, then the car, Akaike (would have to) weight. However, I then choked again and instead of driving north, drove east under the auspices that Broad-billed Sand would arrive on swifter wings than a fall of Phyloscs. Breydon North Wall was heaving, 5 Spoonbills had been there for ages but single Little Stints and Curlew Sandpipers along with lots of Calidrids were probably new. I picked the White-rumped Sand, making its first reported visit to this side of the estuary (from Suffolk

?), a dash round the other side suggested this wasn't a Breydon multiple WRS arrival. North Denes was seething with salt/scum of the earth types and I had to leave before I was dragged into PleasureWorld and forced to eat candy-floss. Ten minutes at Winterton without a migrant and I bottled it and drove home... The heart-break text from James with the Macca haul from the point relayed by Bullet-tooth Tony was nearly too much. Everyone knows the Point is about afternoon arrivals, write out 20 times.... 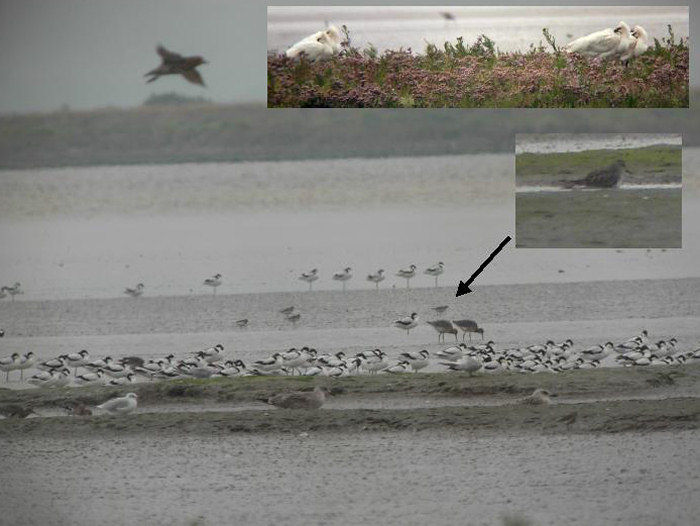 No water/mud at Buckenham = no birds, loads of amazing mud at Chumpshaw = no birds.  Conclusion: draw your own.

Last time I felt this nostalgic for my ex-patch I wrote this, must do some proper work...

Brief mid-tidal visit confirmed that the Wash is an important staging area for migratory shorebirds.... 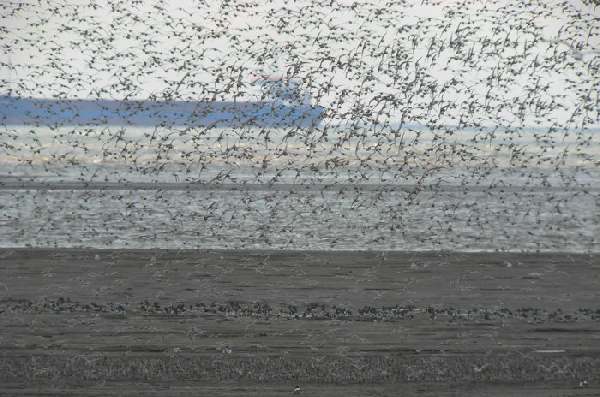 Jez goes out with a point to prove and comes home having picked up two Curlew Sand, 8 Ruff, 7 Black-wit and 3 Greenshank. Accompanied by Ben Lascelles, he also found a SQUACCO HERON. Big up to the Bird.

Pims o'clock, raquet sports on the lawn interupted by subbuteo and Yellow Wag in the interval. Bravo.

Late Summer
Russia (JJG)
On the way back from points further east (of which more gripping stuff will appear in due course), I spent a few days in some woods near to Moscow, which turned out to be a good psyche-up for the fast-approaching autumn. So here are a few tasters to get the blood flowing back into the focus-finger... 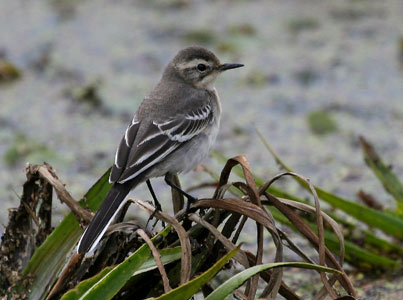 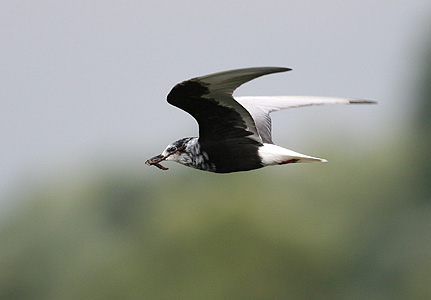 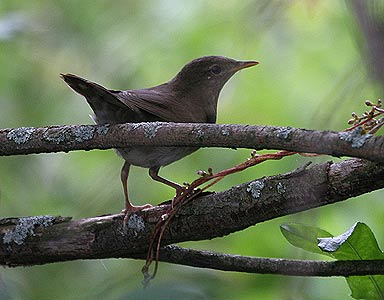 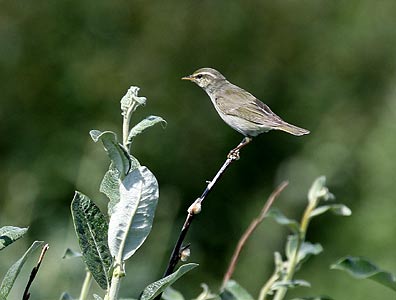 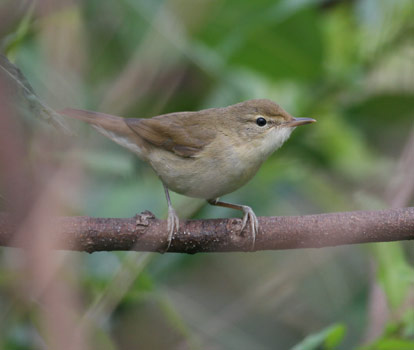 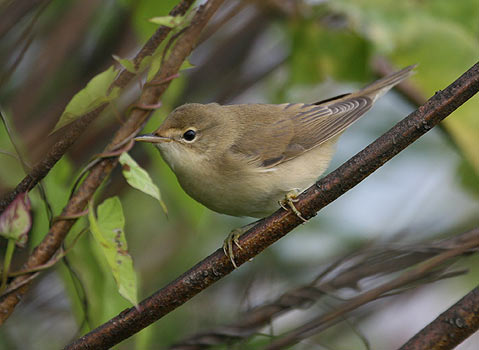 Guess who can't wait for shetland? Anyone having trouble id'ing the last two should a) be utterly ashamed of themselves, b) be really excited about the forthcoming punkbirder id article on Acros, online very soon (as soon as one of us can be arsed to write it). And no, it won't be dealing with Reed vs. Olivaceous, 'cos anyone who can't tell those two apart is clearly a Dude, and should have their Swarovskis confiscated and replaced with a pair of these.

Advanced duding/cheating this morning, took Isabelle out on a seal/tern-boat, spider-sense said Bridled but reality-check wasn't too disheartening - 5 terns adorned the far recurved end, Arctics were my first in the county this year (what happened to spring?) but the prize went to the pair of Roseates which a few months earlier might have been an air-guitar moment as prior to the Cape I had only seen a handfull ever. No pain, some gain. Maybe the same pair last reported at Cley 9 days before? 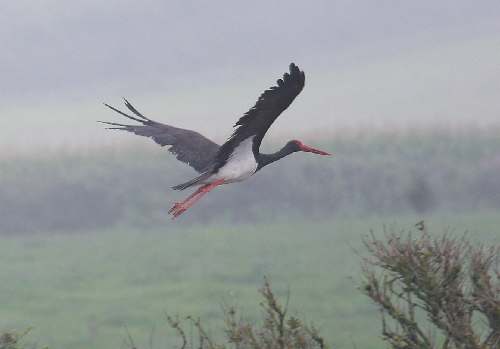