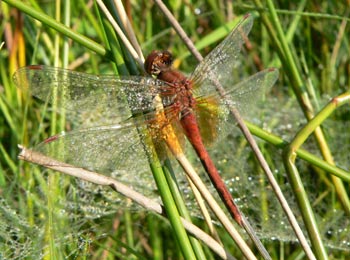 Waders thus far disappointing; haven't seen a Harpy in three weeks (though to be fair am typing this within 800m of an active Harpy nest - don't want it to become too dross) but finaly unblocked Sulphur-rumped Flycatcher for Mato Grosso. Assorted photos include one that is considerably rarer (and sh*tter) than Roy's nisoria.

Consulted the list of heronries last night, along with OS maps and Sennowe Park (3 pairs only in 1998) was directly on the line the bird was heading last night. Wearing full gent attire I headed into the wet, but viewing was more than difficult and I only saw half a dozen Cormorant and 5 Grey Heron, not albino.

2.Manx, some Bonxies and Arctics and other rubbish.

Batting with K at random small blocks of wood around Norfolk. We'd just put out the second recording device at past sunset, 20:39 and got back to the car to go to the next site. I was looking at the map, K got in and said, innocently enough 'heron, up there'. I decided to give it a cursory glance and went a bit pale. It was heron size and shape, but egret white with mighty long legs. Jumped out of the car, panicked trying to get the camera, realised it was too dark, snatched the scope from the back seat and watched a Great White Egret clearing off towards Themelthorpe. Feeling a bit ill I realised that it was the worst record I'd ever heard about, less than 2 minutes flying, mostly heading away and at sunset. I didn't have any bare part colour and certainly didn't even think about rings. After a few minutes we got to a spot of phone reception and I relayed the news to Stu-Pine. I just need someone to find it soon. At present, it's an unlikely record to get past BBRC without eliminating albino Grey Heron, hence it's no points 'til someone at Pensthorpe realises one is outside the cages.

Bit of beachcombing with K's folks turned up little, but a Sedge Warbler and Whitethroat in the bushes at Gramborough had me briefly interested.

The sea at Kelling was pretty dead, but a Whinchat in the quagg field suggested that the rareometer's prediction of a 'small fall' could have come good. After some further dudeing around with waders I headed for East Hills, but my plan seemed to be thwarted by an extremently high marsh tide. Eventually I picked my way across. The fall ammounted to about 10 Willow Warblers and single Garden Warbler and Whitethroat. All warblers were keeping a very low profile thanks to the patrolling of four hungry young sparrowhawks. A brief, distant chakking remeniscient of Fieldfare immeditely suggested the presence of a big sylvia, but after half an hour of trying I couldn't track down the source. A phone call from despondent RM about a barred on blakeney kept my interest up, and about two minutes after hanging up, I went back to the area of the call and immediately booted a nice juv. BARRED WARBLER. It showed fairly well in its chosen patch of brambles - just well enough for me to prove that my Sony "Handycam" is about as handy as an etch-a-sketch when it comes to getting record shots.

IMPORTANT NOTE ABOUT EAST HILLS. The crossing of the salmarsh and mudflats is EXTREMELY DANGEROUS and should not be attempted unless you know the EXACT location of all quicksand patches. Quicksand pockets can shift around, so old maps may not be reliable. Many lives have been lost on those marshes. Please stick to boating if you want to visit this site and don't know the exact route. 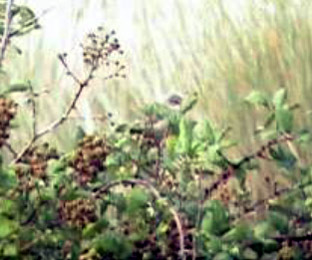 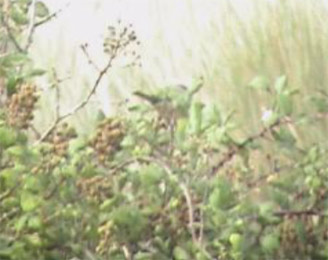 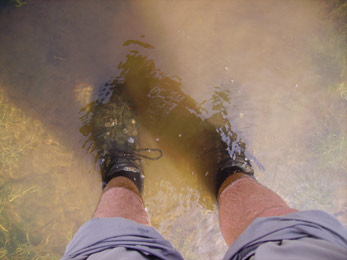 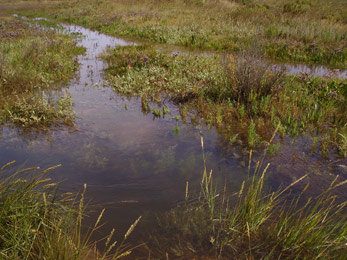 Left: You've got to make sacrifices in this game... Right: The "path" to East Hills.

After my presitgious cricket final was called off I went to the point. Adult Arctic Skua on the newly landscaped muddy area c1/4 mile west of Cley beach car park with Dunlins and Ringed Plovers. Down the point I saw 2.Wheatear, 4.Yellow Wags, Whinchat, Whitethroat, Garden Warbler, 3.Willow Warblers, plus a plethora of migrating waders. Flushed a flock of 50+summer plumaged Grey Plover from a temporary pool by the seawatching hide, plus 8+Greenshank, 4+Green Sands and a Common Sand were notable. Juvenile Med Gull on the beach. Errr, didn't see the Barred Warbler, must have arrived after I left, ahem.

3 Bonxies, 8 Sooty and some more Manx Shearwater. We each had a slightly too distant Balearic type but couldn't pick each other's birds, so sacked them off. 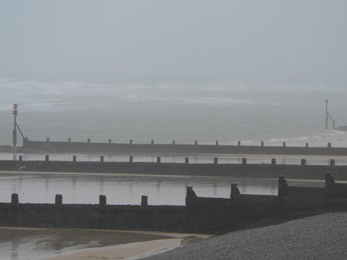 A quick round up of a few broads produced a single adult Little Gull at filby, and very little elsewhere. Finished off at the bird spectacle that is Breydon North Wall. Once again epic numbers, but nothing better than a single Kittiwake to show for our efforts. Perhaps up to a hundred Med Gulls, including only very few full adults - guess that'll be a growing population... 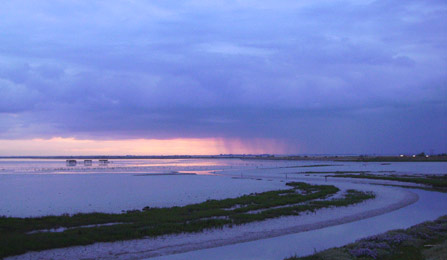 Trying to obtain a photo of the egret but there was no sign of it when I got there. A Marsh Harrier drifted over the pools about 0645 putting up everything including 3 Spoonbill, but no target. At 0650 it suddenly appeared, the Cattle Egret flying towards the herd of bullocks. Great, I thought it'll drop in and I'll blast off some shots. Instead it had got bored of Norton and kept going, gaining height and clearing off up the valley to the south. I watched disappear over the church on the road to Burnham Market. Nevermind, someone must have a photo I can obtain?

After a pleasant days low tide counting at the River Nene mouth I decided to try my current luck along the north coast. First bird I scoped at Titchwell was an adult male Montagu's Harrier distant over Gypsy Lane way. Not bad. 2 Garganey were also low order finds. Got to Norton at 17:25, walked a hundred metres past the metal gate and picked a CATTLE EGRET flying towards me from the west. It swung in and landed amongst the bullocks in the field adjacent to the central track. A sudden uprising of joy almost surfaced, but was frozen by deja vu. Only a year or so ago the scene had been replayed (<1mile away) with a Pensthorpe escapee the subject. That bird hasn't been reported since November but I'm cautious. No rings visible on this one though, and it looks just like the Grove Ferry bird (non-breeding plumage, no buff apparent anywhere). Needs someone with a super-digi-mega to ultra resolve the legs tomorrow. Left after it saw Tim Allwood and flew onto one of the pools just to the west.

Note: a picture of the egret can now be seen here. Is the lack of elongated mantle feathers indicative of a bird of the year?

This is what the Burnham Overy escape looked like on 3rd October 2005. Note many clear signs of breeding plumage, eg. very chestnut crown, elongated chestnutty mantle feathers and yellowish legs. If Rob's bird is the same individual, it has completely changed its moult strategy / timing during its year in the wild, as well as go apparently unseen (in one of the most intensively birded areas in Britain) for 9 months...

A useless weekend. RMa, SM, RMo and JG all featured in brief outings to local wader hotspots, failing to further the rarity finding cause or even record any sightings of note. The most exciting moments are accounted in rob's diary.

Here's a picture of some crows pecking a black-headed gull to death. 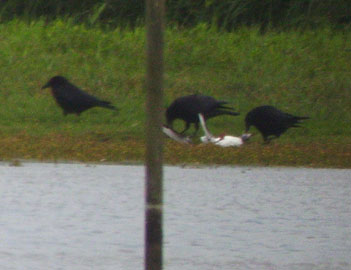 High tide count (work, honestly). 28 Little Tern (first I've seen here all summer) but no Rose for this river. A single Sanderling was the pick of the numerous waders in this sand free zone, but also 97 Blackwits, 10 Common Sand and 3 Greenshank.

Remembered why waterproofs are useful. Also went to Snet and got another soaking while watching Dunlins and Curlew Sand trying to shelter under some ragwort.  Tried Titch and saw Pec. Wood Sand and 2 Spoonbill still in their designated positions on the freshmarsh.

Returned to finish scanning the masses. Most terns had departed overnight, probably lifted by the rising tide, but two adult roseates were still present on the mud opposite the hide. They lifted off at about 05.45. Viewing was difficult in high winds, and nothing else could be conjured from the terns. A good showing of distant waders included 3+ curlew sand, single spotshank, several sanderling, g-shank and whimbrel, plus c. 500 dunlin, including a good few juvs. 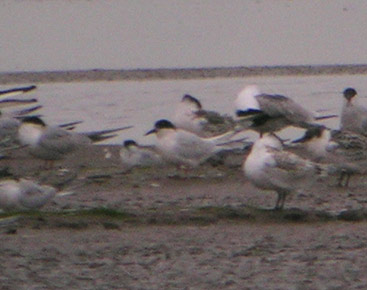 Lots of water, no birds.

Epic. Unbelieveable number of terns, with a steady stream of new arrivals continuing even when we were leaving. Terns covered the whole estuary and filled the air. Commic probably outnumbered sandwich by about 10:1, and there were probably a thousand sandwich... Incredible numbers. Picked out two fine adult Roseates, arriving separately and each disappearing into the distant masses. Could have been many more. Also huge gull roost, including probably at least 50 meds - 33 were counted in a single scan of the nearest section of the estuary, with many more in the throngs behind. Mostly 1st-2nd years, but also a good number of juvs. Waders were mostly distant or hidden behind the ranks of terns.