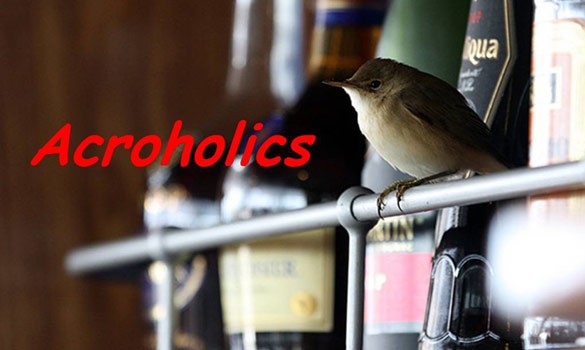 Yeah baby - we love unstreaked Acros. Theres nothing better than seeing a blank, gormless face poking out of a patch of brambles on some damp October morning. s Reed is turning up with ever increasing frequency nowadays (its officially the new Bluethroat), and its clear that modern birders are getting to be as familiar with their appearance as they are with Billie Pipers naked bossoms. Still, if theres a bandwagon to be jumped on, well be leaping on it with the best of them So, were proudly presenting our sage-like thoughts on how to bag a s from this autumns migrant Reed crop. With perseverance, open ears and a memory full of the info contained within this article, you should be ready to pimp your list with a shiny new self found dumetorum.

Thanks to the sterling work of countless experts, we all know that the best feature for nailing s Reed is the famous banana posture (SARCASM ALERT!). The following photos illustrate this pretty well:

Fig.1 Classic s Reed posture. You could stick a Fyfes sticker on it and sell it for 39p.

Fig. 2 Marsh Warbler  always reminds us more of an orange.

Fig. 3 Reed Warbler - tends to have more of a fruit pastille feel about it. 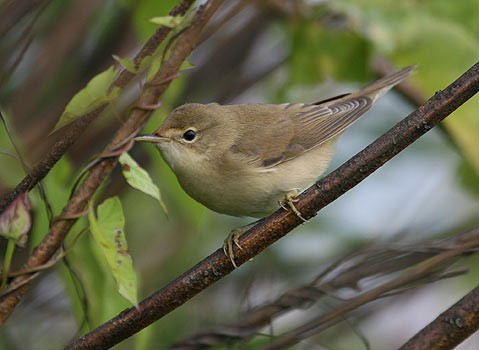 With experience, the face of s Reed is pretty easy to pick from Marsh and Reed. Its a good idea to study lots of standard Reed, watching them from all angles, as they can produce a lot of different looks. Theres always that classic autumn issue of Reeds up in trees (esp. in canopy) - the different setting, lighting and postures can be confusing (e.g.. that Manchunian Reed(probably) Warbler). On s, youre looking for a neat, crispy head pattern, more attractive and keen-looking than the gnarly, grisly face of juvy Reed. The supercillium is the best thing to look for: it almost always forms a nice, clear, creamy blob in front of the eye. On Reed, the super can be fairly bold, but itll never have that crisp feel about it. Continuation of the super behind they eye is a pro-Blyths feature, but not diagnostic. 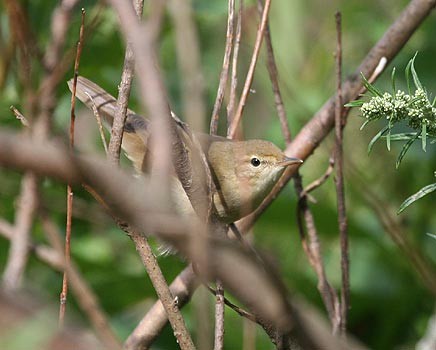 The eyering should be crisp, but dont pin too much on it. The bill is worth looking at closely, although it varies between different postures and lightings. On the whole, s has a short, fine and dark bill in comparison to Reed, with a large dark area on the outer part of the lower mandible (usually less so on Reed, and pale on Marsh). Reed usually has the longest bill of the three, whilst Marsh is usually pale and stubby. But beware of variation within each species, as well as lighting conditions. A well-lit bill against a dark background will look a lot smaller and more dagger-like than a poorly lit bill in silhouette 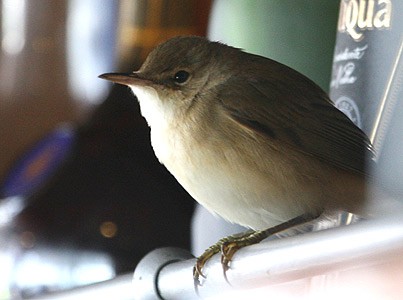 Fig 7 Reed Warbler juvenile: dark, dull, plain and a bit goofy - the type of face only a mother could love. 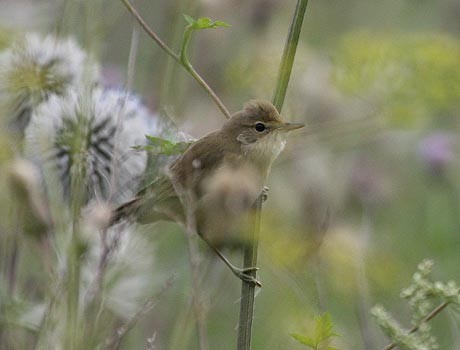 Fig 8 Marsh Warbler juvenile  note the plain, relatively attractive face with pale tones, particularly on the stubby bill. Tricky to tell from s without a view of the wings.

General plumage tone: the truly bastard thing about unstreaked Acros is their ability to completely change in appearance, right before your eyes. Think of the number of times youve followed a monster rare-looking pallid warbler into a patch of cover, only to boot out a minging Reed Warbler on the other side. Same bird, different light, different look. s Reed is no different, and its funny how you can be watching one and thinking how distinctive it is, and then it turns around and looks exactly like an ordinary Reed. The fact is, both s Reed and Marsh juveniles can be very warm toned, particularly on the rump. They can also be just as sullied underneath as many Reeds. s does have a certain unique tone to the upperparts (particularly the wings)  its a kind of dark rusty brown, with an olivey undertone. But its hard to describe, and they often just look very Reedy. Get photos, but bear in mind that photos can lie (the camera adds 10lbs) and keep looking at the bird from as many different angles as possible, to build up a true idea of the features. 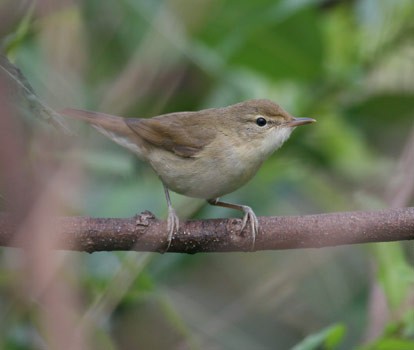 Fig. 9 Although s is usually strikingly silvery below and olivey above, many juvs are actually very warm toned, with dirty buffy underparts. Although the wings, rump and tail are very rusty on this bird, the tone is still distinctly different from that of juv Reed, being more, well, s-ish. 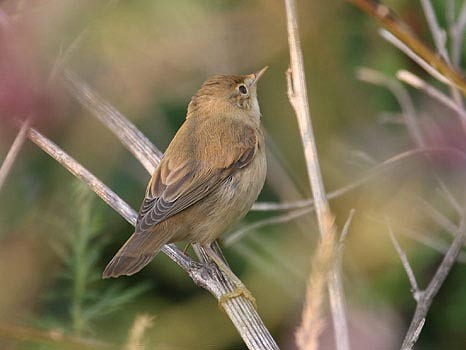 Fig. 10 Marsh Warbler  again showing surprisingly warm tones to the upperparts, especially the rusty Reed-style rump. But check out the contrasty tertials and tail feathers, as well as the short, pale bill and monster primary projection.

In spring, separating these two is as easy as provoking fights on `tardforum. Apart from the song, you can just look for the crispy primaries, complete with silvery edges, on the newly moulted Marsh. Primaries of spring Reed are usually more plain and dull. In autumn, youre basically shafted. A proportion of extreme individuals are fairly easy to confirm, but theres overlap in most features. Unless youre Killer Mullarney, youll have trouble convincing anyone youve found a Marsh without producing some amazing photos. Our best effort, a very Marshy-sounding bird that was at Wells in August, isnt quite clear-cut enough to be absolutely sure. The wings and face look pretty good, and in real life the plumage was very yellowy. Theres big contrast in the tertials and tail feathers, which is definitely good for Marsh, and the claws and feet were very yellow. The primary projection was certainly long  clearly as long as the exposed tertials. But all those features can also appear in a small proportion of juv Reed. Thankfully we found a singing male in exactly the same patch of cover last spring, so its not so painful letting it go 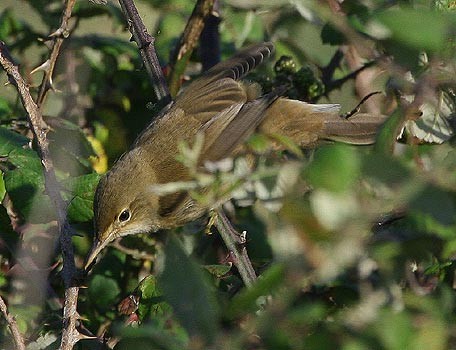 Fig 11 Marsh-ish Acro photographed on East Hills in August. In life, the bill seemed very pale (it looks dark here as its seen from above), and it was certainly short, the feet and claws are yellow and the wings look very good. But is it outside the range of variation of juv Reed?

Its worth mentioning that s Reed, in particular, can be confused with both Paddyfield and Sykess Warblers. And all three have very similar Lesser Whitethroat-like calls. Paddyfield is almost always much brighter rufous on the tail and upperparts, but some individuals are apparently quite pale. The crown is the key  they always have that dark area above the supercillium. The bill is also going to be stubbier. Even pale Paddyfields will still have that Prinia-ish feel about them, like a cross between a Sedgie and Iraq Babbler.

Sykess versus s Reed can be a funny problem  seeing them side-by side in they seem totally different  Sykess is a small, sleek, super-pale crippling little thing. Although s is sleek for an acro, its still a fat bastard at heart, with a blobby tail base and thick neck. Sykess is a slim, square ended bird with nice silvery edges to the outer tail feathers, and the bill always seems finer than But a single vagrant, on its own and out of context, is another matter. Given decent views, the differences in size, bulk, plumage tone and wing shape should sort it out, and the calls are discernibly different if youve listened to the Hannu Jannes CD about a hundred times.

Conclusions
Given good views and calls, it should be pretty easy to determine whether an autumn acro is a Blyths, and they seem to be getting genuinely commoner, so were all in with a good chance. Bagging autumn Marsh Warbler, on the other hand, requires either a camera-friendly individual from the extreme end of the variation, or an observer with Mourinho-levels of self confidence. If all else fails, you can always claim it as a probable Caspian Reed - that one always goes down a treat with the twitchers. Keep your DSLR handy, and keep thrashing the undergrowth  eventually youll get one that goes tak, has that funny shade of brown and gives you some impromptu fruit impressions. s Reed  the true birders bird - we love you like a fat kid loves cake.

All photos by JG, mostly taken either in Russia or in a bar on a boat.